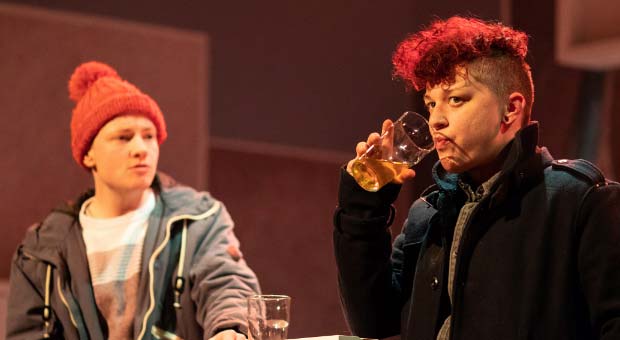 It's New Year in Rotterdam – a time to celebrate, a time for resolutions and fresh starts. Alice has finally plucked up the courage to email her parents and tell them she's gay…but can she click send? Seven years earlier Alice had moved to Rotterdam with her boyfriend Josh then left him for Fiona. After a relationship of nearly seven years Fiona announces that she has always identified as male and wants to start living as a man named Adrian.

Rotterdam is Jon Brittain’s critically acclaimed, ground-breaking LGBTQ drama, playing at the Opera House as part of Pride month. In writing the play, Brittain researched and consulted widely including talking to trans people and their partners, conducting a reading for members of trans communities and discussing the show with various organisations, including Trans Media Watch who then endorsed Rotterdam, and the charity Gendered Intelligence, who the company dedicated their Olivier award to.

Rebecca Banatvala (Alice), Paul Heath (Josh) and Stella Taylor (as local party girl Lelani) are all excellent, but it is Lucy Jane Parkinson who deserves the highest praise for her superb portrayal of Fiona/Adrian and the extreme highs and lows resulting from the decisions she makes.