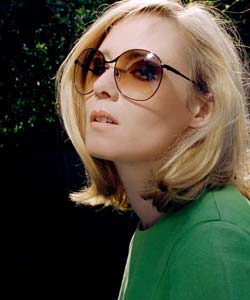 Róisín Marie Murphy is an Irish singer-songwriter and record producer, known for her electronic style. Murphy first came to note as one half of the electronic music duo Moloko with her then-boyfriend Mark Brydon.

She appeared at Gorilla, Manchester and we were there.

Roisin Murphy returns with ‘Hairless Toys’,  her first studio album in eight years and accompanies it with a few album launch gigs, the first of which being in Manchester.

Opening with her Crookers collaboration, ‘Royal T’, we quickly realise this lady has never compromised and therefore she’s not a “popstar” (in her own words), but we love her more for it. Looking like a cross between A Clockwork Orange character and Sarah Greene (really), Roisin armed with an eye patch starts making her way through not only her new album, but with some wonderful odes to vintage Moloko, getting in many little interludes, plus classics like ‘Pure Pleasure Seeker’ and ‘Familiar Feeling’. Her first two solo albums strangely don’t get much of a look in (only one track from each), but we do get two wonderful tracks from last years Italian EP, ‘Mi Senti’, which featured a small selection of classic Italian pop songs (as you do).

The outfits seem to change subtly with each track, though there is nothing subtle about Roisin. Her stage presence is captivating and it’s difficult to take our eyes off her whilst she performs ludicrous but wonderful dances/routines. She’s like another worldy being via Ireland and Sheffield! The highlights of the evening are a ten minute version of ‘Jealousy’ which was a pre album buzz track, and also recent single ‘Exploitation’.

The new album, a mix of dark electronica and hints of jazz really comes alive with a band. The melodies and vocals are really showcased with the extra addition of the wonderful bass heavy tones. Finishing with final album track ‘Unputdownable’, we are left a little disappointed that the set wasn’t longer and didn’t feature just a few more classics, but we have come to be left wanting more with Roisin – after all it’s been eight years since she toured! We also have the feeling that her shows in the Autumn will be a little bigger, longer and more adventurous.

Nevertheless, a wonderful night with a wonderful artist. We are secretly glad we’re left wanting more as that’s what defines an artist that won’t compromise.

For details of more forthcoming gigs at Gorilla.