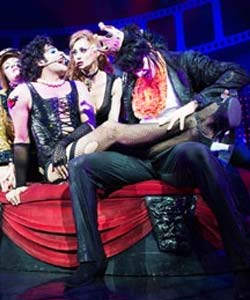 Manchester,last night, came alive with fans in stockings and suspenders and of course a wide range of costumes and feather boas,all associated with this long running show.

The atmosphere was electric and a non stop party began well before the Rocky Ride started on the stage!

As most of you know the storyline,with Brad (Sam Attwater) and Janet (Roxanne Pallett) driving their car until a tyre bursts…and then their life changes for the better. They venture to the castle seeking help. What they find is a another world - one which is filled with a great deal of provocative dancing and songs and some quite powerful singing by all the cast.

The theatre came alive as the show progressed, as all the familiar songs encouraged everyone to participate in and perform the well-known dances and songs.

It's just a jump to the left, with the narrator at the side pointing to pictures of how to perform the Time Warp!

Most needed no reminder and knew every word and every step which were bravely attempted, even in their high stilettoes.

Overall this was a fun experience. The acting and especially singing, were both top class, with all the performers demonstrating great talent. Audiences all over the world, have followed this show for 40 years and last night, no one was disappointed by this version - it was just brilliant!

Oliver Thornton was an engaging Frank n Furter,with a great performance too from Rhydian Roberts as a very sexy,Rocky.

The show finally ends, with cast and audience, again on their feet enjoying the Time Warp.After such a professional, wonderful show,everyone who has ever danced the Time Warp anywhere, enjoyed a fantastic final treat not to be missed.

But don't forget Boys and Girls, to sharpen those stilettoes.