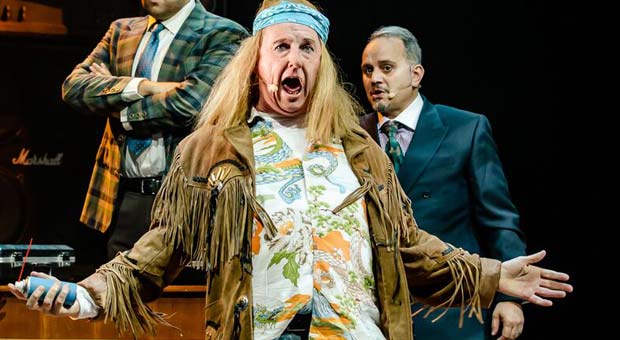 Rock of ages at Opera House

Rock of Ages began life on Broadway in 2009, hit the big screen with Tom Cruise in 2012 and now embarks on a new UK tour for 2018/19. This boy meets girl love story has the usual ups/downs, will they/won’t they moments punctuated by a wealth of classic rock anthems.

Luke Walsh is aspiring rocker Drew who falls for jobbing actress Sherrie (Danielle Hope), persuading Dennis (Kevin Kennedy) to take her on as a waitress at his bar - The Bourbon Room. In a bid to bring clean living onto Sunset Strip the local mayor hires German developers to rebuild the city, a plan that includes demolishing Dennis’s bar. Throw in a washed out rock star (Sam Ferriday), a few protests, minimal female costumes and OTT campery and you end up with a happy ending...for most.

Lucas Rush (Lonny) acts as the show’s narrator. The love child of Jack Sparrow and Keith Lemon, he dementedly bounds around the stage and into the auditorium to continually interrupt the action. Poor audience member Sharon was picked on at the start and referenced, continually, for the rest of the evening.

The show relies on a hard bass beat and harder lighting to assault the senses, taking the attention away from the minimal script. The first half finally lights up when Sherrie takes a new job as stripper at the Venus Club, run by Justice (Zoe Birkett) and they duet Harden My Heart – 2 big voices perfectly complimenting each other. Here I Go Again was a great finale to the Act – even with the jazz hands!

Amongst the detritus of cleavage, hot pants, sexism and racism there are (a few) moments of normality which allow Luke Walsh, Danielle Hope and Zoe Birkett to prove their talents and work together to shine above the rest.

If you enjoy juke box musicals and late '80s rock you’ll love this trip down memory lane. Ultimately it is a rock gig with a strong on-stage band. The final number – Don’t Stop Believing – is guaranteed to get you on your feet and you’ll be singing the songs all the way home.