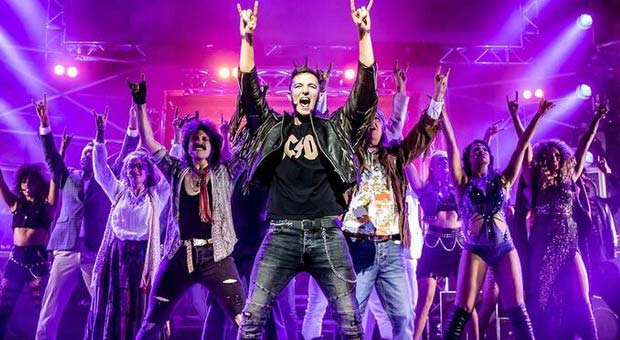 Rock of Ages is a jukebox of the best songs of the 1980s, set around the classic love story of Girl and boy fairy tale with added glitz and glamour. There are many similar styles of shows reliving the glamour and best bits of 1980, but none of them brings down the fourth wall as much with so much tongue-in-cheek humour from LONNY played by @joegashh.

Strictly fan fave, Kevin Clifton, creates the persona of Stacee Jaxx, a famous rocker and a little narcissistic, with a dirty eye for the ladies. It’s no surprise that Kevin can swivel the hips. We also know he can sing from Strictly with Anton and is a master with the Rock of Ages cast.

Lonny (Joe Gash) character creates the anchor of the performance guiding us through the love story. Lonny is rarely offstage. He is a genuine go-getter and a true comedian. Flirting outrageously with cast and audience and Kirsty, who becomes woven into the show again, destroying the fourth wall. Luke Walsh’s playing Drew endeavours for fame and fortune as a rock star. Walsh brings a vulnerability to Drew and sweetness, in his bumpy romance with Sherrie (Rhiannon Chesterman). Chesterman and Walsh make their budding romance, with its twists and a slip joint thrown in for good measure.

Rock of Ages is a feel-good musical that has you (and me) humming the tunes on your way home.