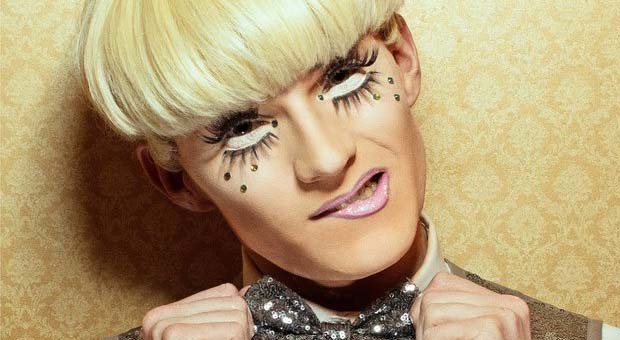 Set in a camp, queer utopia with a soundtrack including Village People, Whitney Houston and the Sugababes, this is a coming-of-age story in drag.

Help! I Think I Might Be Fabulous, about Alfie Ordinary’s time at Madame LeCoq’s Prep School for Fabulous Boys, was on for a night at Salford University’s New Adelphi theatre on 24th February. It’s essentially about not conforming to heteronormativity (I don’t think I’ve used that word before) or to the traditional male oriented stereotypes, and delivers the message in an amusingly engaging way via sequins, glove puppets and song – plus a few bits of camp fun along the way. Think of Fascinating Aïda’s song ‘Sew On A Sequin’ crossed with Avenue Q and you’ll get the picture.

After a bit of audience warm up Alfie told us about his initial encouragement to be himself at school using a personalised rendition of YMCA, and then brought up his friend John – who isn’t as fabulous as Alfie – who is the main alter ego for the rest of the show. It’s not often that you can take a piano on the school bus, but when you’re as fabulous as Alfie anything is possible and he plays and sings to his friend to cheer him up on the way home.

We have Whitney Houston’s ‘Greatest Love of All’ sung by Alfie and the lady herself in effigy, and a surprise comes when Alfie outs himself as a football fan, even though he can’t kick a ball to save his life. This is revealed to a very funny parody of ‘Wonderwall’, after which we see Alfie in action. Naturally the football strip of choice is sequins again, and he does manage to head the ball with a bit of audience participation – much against real-world health and safety rules introduced in the last couple of days – but when you’re fabulous, why not?

The time comes when Alfie has to take his GCSE (General Certificate of Sassy Excellence if memory serves) and we attend his draguation ceremony. It’s all looking good for him, but then sadness settles in as a voiceover from John tells us that Alfie isn’t real – he’s imagined by John to fab himself up. All is not lost though, as Bette Midler comes to the rescue with ‘Wind Beneath my Wings’ – complete with wind machine. A final speech from Alfie – now manifested again – sends us out on our way where we were each introduced to Whitney. Hilarious.

The piece was written 5 years ago and has been performed at various fringe festivals. It’s not lost any of its punch and is still very much current. Bravo.