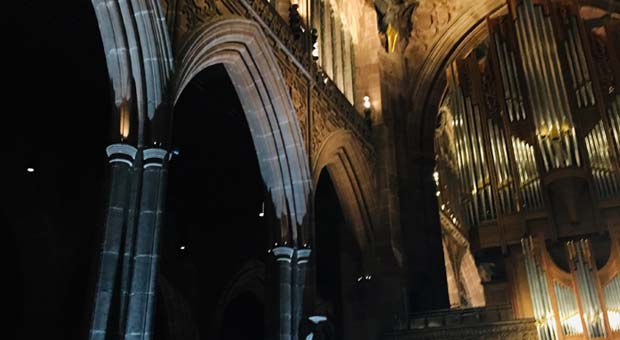 To the lovely Cathedral, beautifully lit this evening to show off the ornate detail of its interior, for a performance of Mozart Gran Partita ( Serenade No 10 ) by Manchester Camerata, with an electronic interpretation of it and  played around it by Sven Helbig.

Sven Helbig is a German composer of classical, experimental and pop music, who composes for both classical performance and tours solo performing electronic music. He has collaborated with, among others, Pet Shop Boys and Rammstein.

Low lighting and atmospheric smoke/steam added to a thrilling atmosphere as the initial electronic music gradually filled the air.

After some time, each classical instrument had a solo part as the Camerata musicians, whilst playing, slowly walked through the mainly standing audience and made their way gradually to the round stage on a raised dias.

It was very unusual and quite captivating. The classical and electronic music gradually blended to a crescendo, then after a short time, the full classical piece was played by the orchestra.

We had never heard this particular piece before and it didn't disappoint. The beauty of the music and the effects of the lighting and surrounds was an incredible experience. It had a lovely relaxing and soothing effect on us and we could see others felt the same.

There was a great informal atmosphere in the audience, some were sitting dotted around the cathedral hall, many standing and some on the floor.

Standing gave you the opportunity to change position to see the performers from different aspects, so very different from the formality of conventional performances. A delightful evening.

Highly recommended. Thanks to Manchester Cathedral, and Cloudwater Brew Co for the bar.