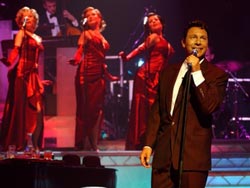 Take a trip back in time to the glamorous, glitzy nights of Las Vegas in the late 1950s and early 60s where, in the company of three of the world’s most popular entertainers, the fabulous Burrelli Sisters and The Rat Pack Big Band, you will experience Frank Sinatra, Sammy Davis Jr & Dean Martin performing at the famous Sands hotel.

Tickets are still available for this must see production at the Palace Theatre, Manchester.  However, you must be quick as The Rat Pack are only performing until Saturday 19th November 2011, before they move on with their tour.

The singers for Frank, Sammy & Dean are incredible tributes to these magnificent men.  Not only do they look and talk like the real deal, they also singing amazingly like them too.  Always in character throughout the performance, you’ll feel like you have been transported back in time.  They also have many laughs throughout the production which make it all the more entertaining.  The Burrelli Sisters join them as backing singers, as well as dancing and make a delightful touch.  The Big Band blow you away with their beats!

It is a very worthy Pre-Christmas treat that you must go and see whilst you can!  It is one show that will get you in the Christmas spirit, which you will truly not regret.

Christmas with The Rat Pack is on at the Palace Theatre, Manchester until Saturday 19th November 2011.

Reviewed by Jamie Masterman for Canal-St.co.uk