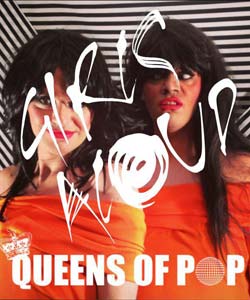 Firstly I want to say hands down I give full praise to any entertainers who take on a venue, put a show together and then put tickets on sale in todays economic climate. It is such a risk and one that requires a great deal of confidence and self belief. Confidence is certainly one thing that the Queens Of Pop have bags of and rightly so.

They have had an amazing twelve months as YouTube sensations with their comedy parodies  and now live performers. So it's Saturday night and my best friend and my good self head to the Road House on Newton Street. Clearly we are not regulars to this venue but the crowd is certainly a whos who of the Gay Village with many familar faces including Anthony Cotton and Kym Marsh.

The pre show music sets the tone well with Madonna, Beyonce and Gaga all in the mix and as the music plays the crowd get more and more excited. The show starts with the arrival of the "Queens" to massive cheers from the audience. A mix of their famous videos and new material all performed live as the crowd in stiches. The crowd is diverse too, not just LGBT but every one for a 60 year old woman singing "I fucking hate Cheryl Cole" to some very trendy girls who were clearly massive fans of the YouTube hits.

The banter between the numbers was what you would expect, topical, cutting and hilarious. They were not without boos at some of them comments but the two of them clearly know how to turn boos into cheers and the crowd stayed with them throughout the show.

The Queens Of Pop are a clearly on the road to massive things, no act is as on the pulse with their content as they are nor do they deliver in such a professional manner. A fantastic way to spend a Saturday evening.