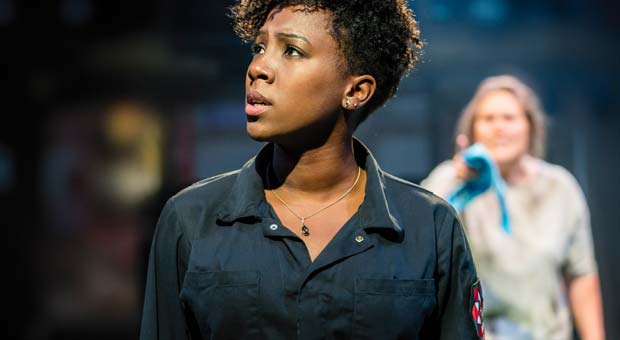 Jeanie O’Hare’s play combines Shakespearean speech and modern phrase to tell the story of the Wars of the Roses with a female twist – through the eyes of Margaret of Anjou. As the wife of Henry VI this is a Queen determined to hold on to power and protect the crown that is her son’s by right.

Jade Anouka is flawless in the title role…from 15 year old ingénue to formidable Queen. She makes her mark early on by forcing out Gloucester who, as Henry’s protector, has been by his side since he inherited the crown at 9 months old. Perhaps Gloucester’s hold on the King explains Henry’s weakness as a monarch, something Margaret soon exploits as she determines to keep that crown in her family line. Henry’s lack of strength only further bolsters Margaret’s, and the gender swapping of the Dukes of York and Warwick further evidence the female power balance. Indeed, the matriarchal approach makes the impact of battle and death of the children even more poignant.

In classic Shakespearean fashion, Margaret is guided by a spirit, here in the form of another strong woman - Joan of Arc, tauntingly played by Lucy Mangan. Helena Lymbery also impresses as Hume - her political commentator-esque interjections providing moments of clarity, reflection and humour.

The creative simplicity of the staging compliments Elizabeth Freestone’s action-packed, pacy direction. The Battle of Towton, which claimed the lives of 30,000 men, is a particularly emotional moment as the company come together in haunting melody.

Should we see more of the relationship between king and queen? No – he’s weak, she has to take control. She is in charge. This is about Margaret and her impact on 35 years of history condensed into 150 mins. This is a powerful production – the history play Shakespeare should have written. Don’t miss the outstanding performances in this fascinating piece of history.