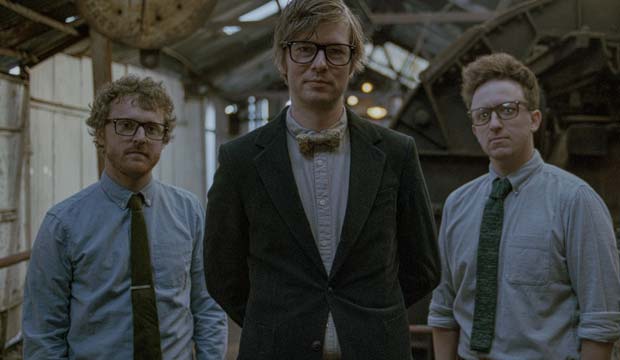 Back in the city almost exactly 12 months after opening the 2016 Manchester Science Festival, Public Service Broadcasting this time brought their new album ‘Every Valley’ for an equally stellar performance at Manchester Academy.

Known for their mixes of historic audio and visual samples, Public Service Broadcasting have gained notoriety for their spectacular live performances - and last night was no disappointment.  With their new album ‘Every Valley’ following the rise and fall of the Welsh mining industry, the immersive audio visual performance involved mining lamps descending over the front of the stage alongside the thundering drums of ‘The Pit’ and ‘People Will Always Need Coal’, and lighting casting the pair of spinning pit wheels in silhouette against the screens at the back of the stage.

Cleverly edited archive footage accompanied the band on these screens in a performance really unlike anybody else I’ve ever seen; ‘All Out’ was given a roar from the crowd as it was blasted out with backing footage of riot police in Wales in the 1970s.  During ‘The Other Side’ - a track from the bands second album, entirely about the race for space - PSB remixes samples of Houston communicating with the Apollo 8 Command Space Module as it passes around the back of the moon.  The lights dropped, the music fell away - all apart from the ethereal crackle of the occasional CSM bleep, as Houston awaited news - and seemingly so did we.

The room seemed to hang in silence for an age - until, upon the big screens above and behind the band - William Anders’ infamous ‘Earthrise’ crackled into view.  As it did so, the crowd erupted - as though hearing the news of Apollo’s safety for the first time in their lives.

It was this tension, this clever blend of emotional music and historical footage that makes PSB so special.  A move that some have dismissed as a gimmick works very well, even for a full hour and a half set.  Surrounded by clips that everybody knows - of Gagarin, of the Spitfire, of police riots - and of footage that nobody knows - of obscure fashion advertisements, of NASA engineers wiping their sweaty foreheads, of wives of miners standing up for the struggles of their families - PSB really is a spectacle of live performance.

Joined by a brass band for a number of their songs, members of a welsh choir - and even a dancing astronaut - the musical aspect of their performance is just as good as their visual triumphs- leaving us, at many points in the night, surrounded by some terrific examples of Dad-dancing.

The band seamlessly switched between guitars, keyboards, synths - and even a pleasing BBC-accented robot that told us at once point to ‘Simmer down, for it is only a Monday!’ - to choreograph a tight, other-worldly show, that kept the audience engrossed and entertained throughout - even, indeed, for a Monday.

For more about the band.