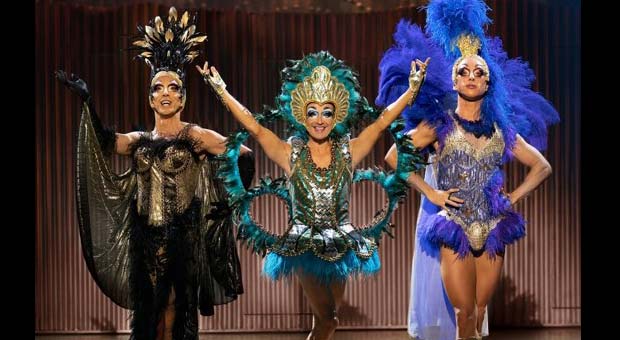 Priscilla Queen of the Desert 2019 tour

When going into Priscilla I consider myself coming from the lucky position of having seen no version of it before. As a gay man, it is probably sacrilegious of me to say that I’ve not seen the 1994 movie but it’s true. I was able to go into the stage show with fresh eyes not knowing the story or why it has standing it does.

In short, Priscilla is the story of a man (drag queens) travelling across Australia with two friends to see his wife and son. In terms of LGBT+ representation this is really a story that has everything and despite being from 1994 the story is updated just enough to keep it relevant for a 2019 audience. Drag as an art form is viewed very differently to the 1990s thanks to shows like RuPaul taking the world by storm. It certainly helps that one of the producers is Jason Donovan who has starred in this show previously.

The lead cast absolutely sparkle in their roles. Each of the cast get a moment to shine with their own individual stories whether it is Tick (Joe McFadden) travelling back to see his son, the blossoming love story between Bernadette (Miles Western) and Bob, or Felicia in the homophobic assault when she just wants to have fun. The musical numbers are of course fantastic and get the audience clapping and humming along. The point when Tick is reunited with his son is heart warming and well demonstrates that the young are best equip to deal with new ideas before a parents bigotry might be allowed to steep in. Fortunately, Benji in this story has two wonderful parents for which sexuality and drag is not an issue.

I questioned going in whether a 1994 story about LGBT issues could still be relevant today and it is as relevant as ever. Yes, there are tweaks to the story to throw in references to mobile phones and dominoes but the main elements of the story still ring true. Whether it is Australia or the UK it is often the case that LGBT people are safer in the big cities, the shield of metropolitan living doesn’t extend far out and rural areas are still hotbeds for homophobia and transphobia. You only need to look at the increase in hate crime against trans people to know that this is true.

Despite those serious points, Priscilla remains fun and hits the right notes in all the right places. Some of the jokes approach the line but never go over it and this is a show that keeps the audiences smiling. I would highly recommend giving this a go. Whilst, I might not have seen the film and the majority will have I have no doubt this will make you happy.

Details and to book here