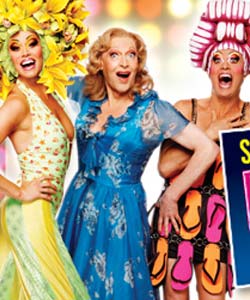 The big pink bus that is Priscilla Queen of the Desert has stopped off at the Manchester Opera House and is showing until Saturday 23rd February 2013.  Starring Jason Donovan, Richard Grieve, Graham Weaver and Giles Watling.

On the face of it, three big guys decked out in gaudy frocks, inch-thick slap, high heels and OTT head gear, travelling around the Australian outback in a battered bus, may not sound like much of a show.  But then Priscilla was never aiming for the sophisticated market.  It's appeal, like the film, is based on excess, exuberance and exaggeration, which it certainly lives up to.

This production is everything I wanted it to be and more.  After being a big fan of the original film, which I've watched over and over, I really didn't want to be disappointed.  I most certainly wasn't disappointed and left wanting to watch it all over again.

The costumes are way over the top and matched what was seen in the movie perfectly.  They were big, loud and most definitely proud.  No expense spared and not afraid to be daring, the costumes were spectacular.

The music chosen matched this story perfectly, including songs not seen in the film.  Everything fitted into place, whether it be for comedy, romance or sadness, the songs appeared that they were made for this production.  There was no bad notes to be heard and the Divas sang all the songs live, with supporting singing from the male leads.

Jason Donovan played Tick (Mitzi) wonderfully, making a believing performance that stayed true to the film.  Richard Grieve was a true lady playing Bernadette with great sophistication and glamour.  Adam (Felicia), was played by Graham Weaver and was camp, loud, cheeky and all about being the life and soul of the party.  Darling Bob, played by Giles Watling, was a nice gentleman and friendly mechanic.  The supporting cast and ensemble had fabulous characters, singing and brilliant dance routines.

You'll feel in a spin through out this production, with dazzling costumes that are quickly changed throughout.  A more than camp bus that certainly makes you feel as if you're part of the journey, which truly was the centre piece to this whole production and most definitely will not disappoint.  The dancers are stunning, not only in looks but the well choreographed routines.

If you love camp, love gay, love a good drag act and a fan of everything pop music... Then grab your feather boa and head down to the Manchester Opera House before this bus continues on its tour.  As brilliant as the movie, if not better, it's one show you cannot miss and will want to go back and see again.

Priscilla Queen of the Desert is on at the Manchester Opera House until Saturday 23rd February 2013.