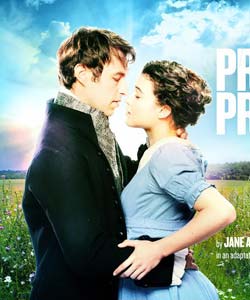 Pride and Prejudice at The Lowry

It is widely considered as one of the best novels ever written and the BBC TV series in 1995 set the bar for any period drama since, with Colin Firth’s iconic Darcy emerging from the water, so it takes a brave company to take on Pride and Prejudice. The Regent’s Park Theatre Ltd tour of Pride and Prejudice has nothing to fear because it is nothing short of perfection.

The staging is lavish, complete with revolving elements and a magnitude of props which take us through the houses of the Bennetts, Darcy and Bingleys as the familiar story comfortingly weaves it way around misunderstandings and mismatches until we get to that all important happy ending.

This production is faithful to the book and the period which is no bad thing, allowing the audience to sit back and relax, we know what we’re going to get and in the first few scenes we’re confident it’s going to deliver.

The cast as an ensemble are faultless. Not surprisingly, Matthew Kelly and Felicity Montagu as Mr and Mrs Bennett reign supreme. Kelly’s performance is strong as the ever enduring husband, trying to provide a sensible antidote to his wife’s single minded determination to marry her daughters into wealth. Montagu is a wonder to watch as Mrs Bennett, perhaps one of the best comedy characters ever written and the blueprint for so many characters to follow her path. She had the audience in hysterics as she swooned and plotted her way through the play.

Benjamin Dilloway plays the awkward Mr Darcy well as did Tafline Steen as Elizabeth Bennett although, at times, they were in danger of being eclipsed by the myriad of comedy characters swirling around them.

Leigh Quinn takes on two roles, the misfit Miss Mary Bennet and the ailing Miss Annabel De Bourgh. She does both of these which such wonderful comic timing that she is surely a name to watch out for. Never has a cough been so perfectly timed. Dona Croll takes on the villain, Lady Catherine De Bourgh and delivers an excellent performance, staying just the ride side of pantomime villain although there were a few hisses from the audience when she delivered her attack on poor Miss Bennett.

It must be difficult to boil down such a beloved tome into a two hour stage production but this version really does it justice with nothing being skirted over or missed out and by the end, the audience left with a smile on their faces which is surely the best praise there can be. If you can get tickets for the rest of this run, do it.