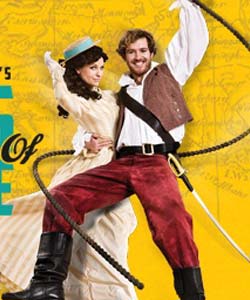 Pirates is possibly one of the most successful Gilbert and Sullivan operas, it certainly has some of the most recognisable themes in it score, which are evident from the overture.

This comedy concerns Frederick, a young man about to come of age (21) and soon to be released from his Apprenticeship to a Pirate.  This unlikely situation has been caused by a simple miss understanding.

Fredrick having a strong sense of 'duty' has kept with this apprenticeship. The play builds on this theme of 'duty' and how the characters interact with theirs.

This production has a large cast and they deliver a lively and engaging performance. Cleverly crafted acting with a playful sense of humour representing a crew at sea, to the ladies on the beach and remorse in the chapel.

Look out for Graeme Broadbent, the Police Sergeant, his delivery will raise the heart of any brigand. His performance is very akin to the zany elements of John Cleese's performances.

The interactive set designs bring the scenes to life with moving rockery, tall ships and flying tombstones. Watch out for the seagulls.

Orphan, no often a reviewer's lot is not a happy one, however this time his lot was excellent.  This Scottish Opera and D'oyly Carte production is hugely enjoyable and very recommended.