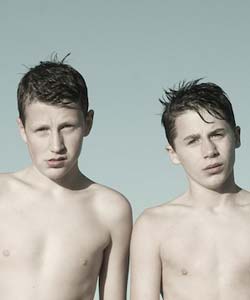 Petrification at the Lowry Studio

This gripping three hander, centred around the aftermath and build-up to a family funeral is one of those gripping gems, which creeps up on you and makes you realise there is more to life than big budget West End productions.

Superbly staged, so that you feel you are sat in a pub, waiting, the narrative follows two chalk and cheese brothers – Sean (played with genuinely cheeky charm by James Baxter) and Simon (Neil Grainger highlights how this Academic can ‘turn’ nasty) as they get ready to say goodbye to their larger than life father.

The title comes from the idea that our version of events are frozen in time, and in the case of siblings, the feelings these evoke differ greatly. Even though this is a small play, whereby it is essentially a character study, there is much to commend. Firstly, as a gay character - Sean is not a victim and he does not die. You may smile, but this is a common theme in dramas, writer Zoe Cooper bucks the trend and creates vivid and interesting characters who are not weak or playing seconnd fiddle to anyone else.

If anyone is the victim, it's Simon - the straight academic, who on the surface has it all. Or does he? As the narrative twists and turns, all is not as it seemed, on this heady and drunken day, when the three characters look back, in order to move forward. Aidan is a great character also, as he is selfless and wants to do right by everyone but does not suffer fools gladly. Jamie Quinn imbues him with strength and humanity.

Neil Grainger delivers an almost scary performance, once the truth starts to emerge. He is not the golden boy, we once thought but - neither is he is a villain. That is because his performance has layers, and he is really good at holding back, until he boils like a kettle towards the end. James Baxter is also wholly convincing as the loyal and humourous, working class brother.

Who is recalling the truth and who is wearing rose-tinted spectacles? That is never really that clear, but neither are familial relationships, they change and rarely do we have the 'Kodak' moments we see in Hollywood films. Mark Maughan's direction is always on point, as he realises this is a 'memory' play, so everything feels fractured and raw.

Petrification is a fantastic play, it it involves the audience, as each revelation is unearthed. It reminded me of flicking through a photo album and contains the gamut of emotions that this entails.

Performed with panache and thrill a minute, this is one of those plays you will be glad you caught, as it is truly unmissable.