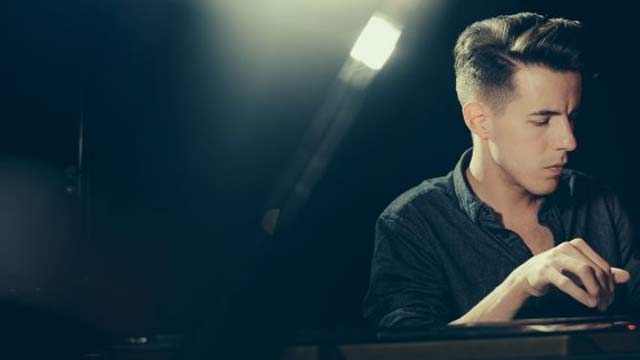 The Velvet Rage, takes as its inspiration from Alan Downs’ book of the same name; Pete’s piece celebrates progression in diversity in 2017, with a special dedication to ‘Alan Turing’s Law’, as well as marking 50 years since the passing of the decriminalisation laws via the Sexual Offences Act of 1967.

We covered the performance and here is what we thought..

I was fortunate to attend and be asked to review Pete Lee’s memorable gig at the MJF on sun.30/7/17. Pete appeared with his ‘Velvet Rage Project’ ensemble,which I think was formed in 2012. His inspiration for this project is Alan Downs’ book of the same name.

I have to admit that I had been unfamiliar with Pete’s work up to now, so this review is from an unbiased viewpoint. It must be said however, your reviewer is fully sympathetic and supportive of the LGTB movement!

The main context in which this set was being played, is that it is 50 years since the passing of decriminalization laws via the 1967 Sexual Offences Act, which has had a huge impact on the lives of Gay people. The set was intended to celebrate the progression in diversity in 2017. Pete Lee himselfcomposed all the pieces played.!

Pete started the set by introducing himself and his 10 piece band, which included the 5-piece ‘Amika Strings’-this may or may not be a one-off. He expressed how pleased he was to be back among many good friends, and how grateful he was for the support of MJF.

The first number played( title not given) began with a short Tenor Sax. intro by Josh Arcoleo (who had played with the Nikki Iles Quintet the previous day). He was soon joined by the soft sound of the strings playing lovely modern, gentle rhythms. This led to an intricate but lively Piano solo by Pete. A vibey ,poppy section followed with all instruments  joining in. There was then a soft, tingly piano link by Pete which led to an

His second piece, entitled ‘Velvet Rage’ was a beautiful work, played only by Pete and the String section. He said it was meant to reflect the struggle for validation endured by many Gay people in the past, and that it had become easier for many in the modern day. It was a lovely soft moody melody, with the piano and strings blending so well together in harmony. You could feel the emotion of liberation coming through, perhaps reflecting a peace of mind achieved...

The 3rd work (no title given) was another beauty- a soft Drum intro led to a heavy thumpy Bass/Piano phrase. The Sax. soon joined in to add a bit of weight. In fact ,it was surprising how effective the single brass instrument was throughout the whole performance! A quiet Piano/Bass/Drum section followed, then a series of slow/fast movements. This I found slightly discordant, but in a delightful way—that’s Jazz!

He then played a piece called ‘Dependency’ which began with a Chamber Music style sound, which when joined by Bass and Drums, gave a modern jazzy feel. The pace  and volume picked up and down as the Sax. had different moods. I really enjoyed the sensitive Drum and Bass playing in the quieter moments. A P.L. solo followed and there was an almost Arabesque finale.

The penultimate ‘song’ was called ‘Betty F...’-named after a bar in Berlin, frequented by some of that cities’ Gay and Trans community.A jamming start led to a peaceful Piano phrase backed by understated Drums. The piece then became quite playful with different instruments dropping in and out-perhaps reflecting the moods in the Bar? A nice moody P.L. solo led to a hoppy/boppy end.

The last piece(again,no title given) began with Violins being plucked and played, then joined by Piano and Cello. An orchestral sound developed with some repetitive melodic lines. With Sax./Bass/Drums joining in, there was a gradual build to a full band crescendo...great sound! Finally back to quiet Piano, Cello and Violin plucking for a peaceful eerie finish.

I must say that I thoroughly enjoyed the Pete Lee experience, and will definitely go see him perform again. It was a thoughtful and diverse performance, leaving a sense calm and liberation. E.M.