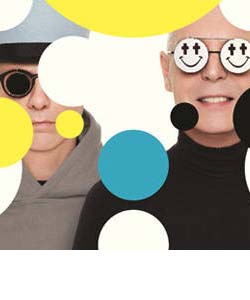 The winners of the BRIT Award for Outstanding Contribution to Music, Neil Tennant and Chris Lowe have sold more than 50 million records worldwide spawning 22 top ten hits including the number one singles West End Girls, It’s A Sin, Always On My Mind and Heart.

The 2017 Super tour production is based on the sold-out Royal Opera House shows staged by designer Es Devlin and choreographer Lynne Page.

The tour arrived at Manchester's Arena and we were there..

"Our evening began with friends, in the highly recommended View Experience where we reminisced about past concerts,PSB annecdotes and in 2 cases actual meetings with the pop duo.By the time we took our seats we were ready and primed..

The Pet Shop Boys are both arty and intelligent chaps, who are celebrating more than 30 years’ experience of bringing  exotic and sometimes obscure,ideas to the pop world.

Together with set designer Londoner Es Devlin, who has beautifully straddled the worlds of theatre and pop with apparent relish and ease ( She also stages actual operas; aswell as the  Rio Olympics opening ceremony, last year) they gave us a rare visual and audio feast from the off and a packed Arena sensed something very different and yet somehow familiar was about to unfold?

Manchester's world famous Gay Village must have been deserted for several hours last evening as frontman Neil Tennant and keyboardist Chris Lowe (still the Pet Shop Boys as they reminded us all) were live at The Manchester Arena and it was packed to the rafters, with a giddy LGBT crowd.

Arriving on stage attached to spinning circles and both in matching silver helmets the pair take on the appearance of Treckie -style Frank Sidebottoms and launch straight into a set which is largely of their more recent output from albums 'Super' and 'Electric'.

A joyous Samba styled 'Se a Vida E' eases into a lovely operatic version of 'Love Comes Quickly', complete with a showreel of interpretative dance.The tone is well and truly set.

They’re also not afraid to be dark too, with the cold imagery during 'The Dictator Decides' with its erie relevance to modern times,is quickly followed by 'Into the Dream'.

Quickly the mood is lightened when the band’s debut chart-topper, 'West End Girls', then follows with its throbbing intensity and is one of those classic 80s hits that still sounds as fresh some 33 years on.

The lighting design is spectacular throughout this show, never more so than on 'Home and Dry', when the strobes of coloured lasers reach out across the arena.

Tennant announces that they will be doing a "new version of an old song" the result being an entertaining techno-bop romp through 'Left To My Own Devices'.We all know the words and gayly singalong..

The boys then tease us with the opening strains of Heart, before continuing into the uplifting 'Go West' with an enthusiastic audience providing backing vocals and it has to be said, some seriously dodgy dancing..

'It’s a Sin' is the spine-tingling climax of the main set, retained in its original cinematic glory and the crowd love it.The arena, is by now, one massive nightclub.

Enormous, multi-coloured balloons, spectacular lasers and hauntingly beautiful moving backdrops all add to the overall spectacle of the performance.

The duo and their 3 able musicians, return to stage for an encore of poppy 'Domino Dancing' and their definitive cover of 'Always on My Mind' before a reprise of 'The Pop Kids' to remind us all of their very early days.

Critics of the PSB often say they have made one song last 30 years plus with many variants of lyric.

However,whilst there is no doubt that there is a recognisable element to the pulsating beats, the individuality and often ambiguity of those lyrics and the unique vocals of Tennant, they all combine to remind us of times, places and people who have touched all our lives.That night in Cruz101, that man who broke your heart? You get the drift.

And by the way, that 'same' treatment has to date sold more than 50 million units and won them countless accolades and awards..Point made..

"Manchester we must do this again" retorted Tennant as they drew the gig to a close and so, having been beautifully reminded of all those earlier times, the vast crowd sprawled out into a drizzly Mancs evening no doubt to the relief of the several village bars/clubs who had organised post PSB parties".

Find out more about whats coming to Manchester Arena.