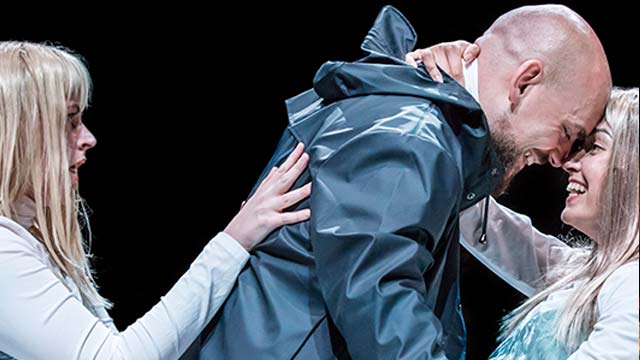 From the opening moments it is clear this is not what most people will expect. Who would have thought Austen could write for the 21st century? Who would have thought Jane’s work could generate such hilarity? There are moments in the first half where you may question whether the frivolity dominates the tale, and, yes, there is that danger. However, the quality of Jeff James’ direction ensures this does not become farcical, with the more reflective second half balancing the earlier lightness. The original story is adhered to: girl meets boy; girl spurns boy on the advice of elders; girls regrets the cowardice of that decision; they meet again 8 years later…

Lara Rossi (Anna) is superb. Rarely off the stage, she leads and dictates the action through a series of ‘tig- you’re out’ slices of time that become increasingly harder to achieve. Helen Cripps and Dorian Simpson are hilarious in their Jeremy Kyle-esque portrayal of Anna’s sister Mary and husband Charles.

The challenging staging offers more than it initially reveals, as do the cast with their onstage changes and beachwear moments.

If you spent your formative years indulging in Jane Austen, whilst socialising at the Hacienda / Sankeys, this is your ideal night.

For more at Royal Exchange.