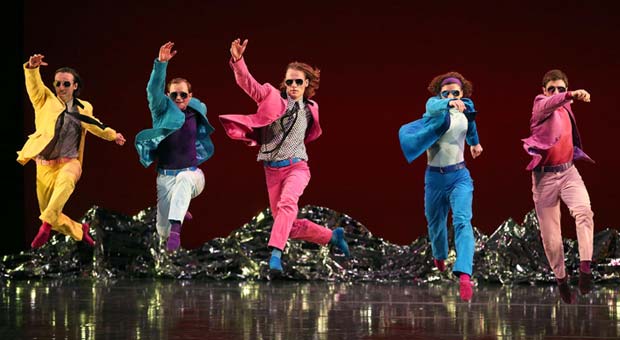 Pepperland at The Lowry

Pepperland, by Marc Morris Dance Group, takes a handful of tracks from the Beatles’ Sgt. Pepper’s album, rearranges them, inserts other non-Beatles pieces by Ethan Iverson between them, and delivers the resulting sequence as a kind of ballet chanté.  I counted as many as 17 dancers, who were driven along by 6 musicians and a vocalist.

As well as what’s going on on stage, it’s also very accomplished musically, occasionally annoyingly so as the tempo you’re familiar with is reworked with extra and missing beats. This does keep you alert though. The album tracks are vocalized. The extra pieces are not. An instrument I’d heard before but never knew what it was (a Theremin) is almost a star of the performance on its own.

In keeping with the period of the subject matter it’s very colourful. Some “tracks” are performed en-masse. Others are in groups of 2 to 5, with occasional solo elements. Everyone on stage is given equal prominence, including the apprentices. All of this makes for an energetic and exuberant hour of modern dance – with some classical moments – of marching, twirls, lifts etc., and before you know it, it’s all over.

We open with the eponymous Sgt Pepper’s Lonely Hearts Club Band, in which the dancers are introduced and each is given a character from the album cover. We close with it as well. The selection of tracks in between is just as interesting for what was included as for what was omitted.

We had Magna Carta (original), With a Little Help From My Friends (album), Adagio (original), When I’m Sixty-Four (album), Allegro (original), Within You Without You (album), Scherzo (original), Wilbur Scoville (original), Penny Lane (album), and A Day in the Life (album). It would have been interesting to see interpretations of Lucy in the Sky With Diamonds, or Fixing a Hole, or even the poignant She’s Leaving Home – one of the saddest Beatles songs around.

All in all it’s a great evening which must leave those on stage exhausted.

At the end Mark Morris himself came on stage to add his applause and receive his own.

The tour continues in Salford, Edinburgh, Canterbury, Cardiff, Plymouth, Southampton, Norwich, Newcastle and Dublin. If you can’t make any of these take a look at http://danceconsortium.com/PepperlandVideo to get a taste.