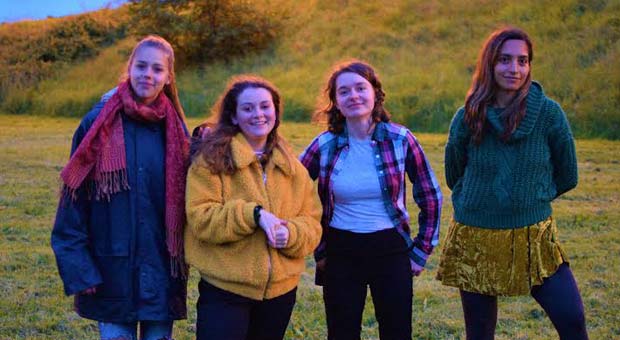 People are happy on trains

People Are Happy On Trains, at Twenty Twenty Two venue, GM Fringe.July 2019 This Galway based theatre company are new to Manchester.

The performance was held in a side room off a lively bar and ping pong venue. The noise from the patrons outside did occasionally impinge in quieter moments, but didn't detract from the experience. A very simple set of neatly arranged chairs, 4 cast members are playing separate travellers on a train. One has suffered a terrible bereavement and is desolate, confused, anxious.

The characters around her also provide snippets of her memory related to the death of her younger brother, an angry resentful parent, well meant but patronising advice, professional counselling input, as well as playing fellow travellers ( all strangers ) who have the usual tics of territorialism and personality traits which amplify in a confined space.

The sparse set allows for imagination to fill in the gaps, as happens when hearing the conversations of strangers on so many other train journeys, creating a back story to help frame what you hear. The raw emotion and fragility of the main character was incredibly moving at times, particularly as she appeared to be so alone yet surrounded by people. The noise of enjoyment of patrons in the bar next door in moments of silence just added to the poignant effect. This was a short and very simple production, but nonetheless one which stayed in the mind for some time after the performance was finished.