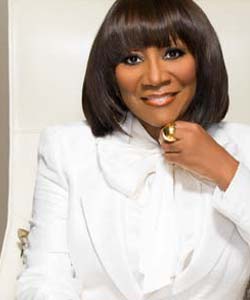 I have been a fan of Patti Labelle for decades, but i was not prepared for what i was about to experience.

Two short sets from UK based artists set the mood for a good night and demonstrated some great talent in the process.We were then treated to Miss Meli'sa Morgan who looked and sounded terrific and although lesser known in the UK, she breezed through her set with great confidence (including descending into the standing audence for selfies and close interaction)with a voice and style similar to Ms Labelle herself.

After a short break, the veteran band The Whispers then appeared with a wall of sound supplied by 7 superb musicians who were to be with us for the rest of the evening.

With some 5 decades of success behind them with classic hits like 'As the beat goes on' and Its a love thing' the trio (as they now are) took the baton from Ms Morgan and raced forward through their 50 min set, really warmimg us all up in readiness for the final handover to the incomparable Miss Patti.

The lights then dimmed, John Stanley (her musical director) appeared and took his place at the piano. The music started, that voice came from the dark dressed in a long,'shaggy' full length coat, which when removed revealed a stunning Red Flapper style dress and her trademark Red high heels.Simply Patti Labelle looked stunning for any age, let alone her 71 years so far.

With everybody on their feet she went straight into her choice of songs for the evening.What would she choose from a repertoire stretching back several decades?We all have our personal favourites and i eagerly awaited to hear if mine were included.

I didnt have long to wait.My spine tingled (as often happens to us when we anticipate something exciting) as i heard the opening bars to 'If you ask me to'.This Diane Warren song is more associated with rival chanteuse Celine Dion, despite the fact that Patti 'did it first' as she put it.I do love Celine's version, but would included Patti's in my Desert Island Disc selection.She sang it beautifully.

'New attitude',a soulfoul rendition of 'If only you knew', a tremendous version of Gamble and Huff's 'If you dont know me by now' was followed by the Kelly and Nelly classic 'Dilemma' again another number first sang by Patti.No live performance would ever be complete without her 2 staples,'Lady Marmalde' and of course the  searing vocals of 'Somewhere over the rainbow'.

Patti Labelle also has that great quality found in only truly great artists, which is the confidence to share a platform with others of exceptional talent.This was demonstrated several times last evening by not only name checking her wonderful group of musicians (many of whom had been with her decades), but also by handing the mic over to her backing trio all of whom sang individually to great aplomb.

Unsurprisingly, at one point Patti kicked off those heels and we suddently found ourselves in the hottest place in town.The energy she and her musicians created was electric, which came to its peak as she too walked down into the adoring standing audience in front of the stage for selfies,hugs and kisses.She duly obliged whilst somehow continuing to sing throughout.Quite a feat in itself, but also a challenge for the surrounding security personnel.They kept her safe and escorted her back on stage.

Patti LaBelle looks amazing!! Patti Labelle is funny!! Patti LaBelle can dance!! Patti Labelle can still sing as only she can!!.In fact as a Gemini (often associated with 2 of everything) her voice is still powerful,soulful, skilled, and anointed with the strength and clarity of 2 mortal voices combined.

Then as if we hadnt experienced enough, her short finale was the possibly the most impactful and moving i have ever witnessed as the huge screens behind her displayed many of the great departed artists and family members all of whom had clearly influenced her through her 71 years.

Diminutive in physical stature she maybe, but Patricia Louise Holt, Patti Labelle to you and i,stood tall as a giant of soul music which Manchester was lucky enough to enjoy last night.

Her final UK date is Sunday night in London and i urge you to try and get a ticket.You WILL NOT regret it.  Iain Scott for Canal St Online.