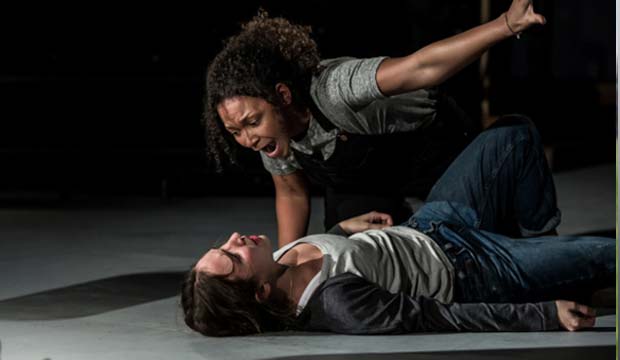 James Fritz’s Parliament Square was selected for a Judges Award in the Bruntwood Prize for Playwriting 2015 and, in a co-production with London’s Bush Theatre, is the second play in the Royal Exchange’s Autumn season.

The play opens with Kat involved in a duologue – a heated conversation that we soon realise is between herself and an internal voice, goading her into action. People on the periphery are only heard in recorded voiceovers, as we steadily understand what Kat is planning – a trip to London that will change her life forever.

With a small cast and stripped back staging, the script needs to hold its own. Esther Smith is faultless in the lead role, holding our attention throughout the 90 minutes. It’s clear Kat believes something, some act of defiance, needs to be done to draw attention to… what? I’m not sure this was explained, or does Kat actually truly know? Certainly the idea of a dissolute young woman determined to perform a headline seeking act resonates with today’s society and it was fascinating to follow the consequences of that moment not being fully realised.

The passing of time was cleverly conveyed through numerous renditions of Happy Birthday, the intervals between getting shorter and shorter. However, overall, the play felt fragmented and I’m not sure I understood what took place, or why. With (I assume) director Jude Christian following the script by torch light in the auditorium and the end coming nearly 20 minutes earlier than advertised, I am left to wonder if the cast jumped a section or some judicious editing had taken place prior to curtain up.

Whilst the final moment is a powerful mirroring of the earlier action, the end was abrupt and left me wondering what next?