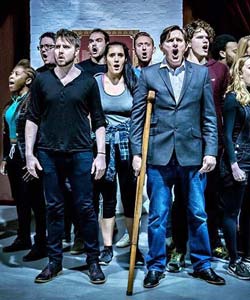 First performed on Broadway on 1998, Parade is a musical dramatisation of the 1913 trial that sees Jewish factory manager Leo Frank convicted for the rape and murder of 13-year- old employee Mary Phagan, a fate sealed by a sensationalist publisher and a janitor’s false testimony.

James Baker’s excellent staging makes great use of the performance space both in front of and behind the audience, and keeps the audience gripped from one tense moment to the next.

Tom Lloyd leads a strong cast, conveying the gentleness, determination and final acceptance of the ill-fated Leo. His only defenders are a governor with a conscience and, eventually, Lucille, his Southern wife who finds the strength and love to become his greatest champion. Laura Harrison is mesmerising as Lucille – what a voice! Indeed, the entire cast astound with powerful vocals and haunting harmonies, alongside music from the impressive band led by Tom Chester.

This is not just a tale of injustice; it is a powerful anti-Semitic drama that doesn’t shy away from the persecution of Brooklyn-raised Leo. The original trial split America, re-ignited the Klu Klux Klan and spawned the Jewish civil rights organisation, the Anti-Defamation League.

An emotional powerhouse of soaring music and gentle ballad, catch this faultless, must see production before it closes and discover a new venue with huge possibilities.