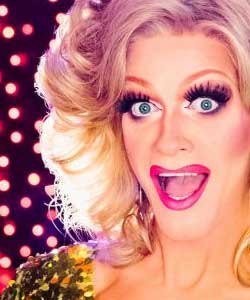 If you’ve heard of Panti Bliss, chances are you’ve seen the amazing, inspiring speech she made a few years ago in response to a furore around comments made by her alter ego, Rory O’Neill on an Irish talk show. If you haven’t checked out this speech or the TED talk that came after, then I would heartily recommend you do.

Bliss is an incredibly eloquent figure who puts into words feelings that many of experience at some time or other on homophobia, gay marriage and what it means to be gay in the modern world.

Manchester played host to Ireland’s national treasure on Tuesday at HOME for her latest tour, High Heels in Low Places and what a night it was.

Panti delivered a great show with plenty of audience participation and laughs as well as her searingly honest response to her experiences at the hands of the media and also the subsequent debate in Ireland on gay marriage.

Panti is incredibly down to earth and honest without being overly confrontational which totally works in her favour although my only slight gripe would be that she sets up situations beautifully, like a story about the first time she saw semen, only for the punchline to be lost.

However she hits the mark more times than not with a brilliant description of the concept of tranny chasers and also the world, and in particular gay world’s, reliance on social media to meet prospective partners. However, even Panti was lost for words when one enthusiastic punter announced he found his partner on cottaging.com.  Her way of breaking down gender stereotypes is fantastic, looking at everything women go through to “look beautiful” which are forbidden for men. The line of night was “I’m so glamourous I’m practically disabled”.

The pace of the show is remarkably gentle with a wonderful portrayal of her mother and how her perception of having a gay son has changed over the years but she is never a stone’s throw from a wicked one liner or two.

If you’re in the vicinity of Panti then I would strongly suggest you check out her act for yourself, if only for the recollection of when she and her friend went on an American talk show years ago, this is truly hilarious but I’m leaving it there as I would never spoil her act.