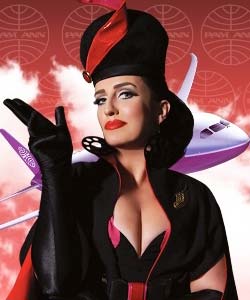 Pam Ann at The Opera House

The world’s favourite International Air Hostess, Pam Ann is back in the UK with a new show for 2015. Pam Ann’s caustic wit knows no boundaries so fasten your seat belts and prepare for take-off – she’s Queen of the Sky and it’s guaranteed to be a turbulent flight.

Pam Ann – Queen of the Sky

Fasten your seat belts and stand by for a flight to remember. Pam Ann is back, bigger than ever (“thanks to a love of Gregg’s steak slices”), entertaining her devoted following of eager gays.

Not for the faint-hearted, the air turns bluer than a Pan American World Airways logo within seconds of this gay icon landing on the stage. In the first half there seems to be less of the air hostess and more the acerbic tongue of her creator, Caroline Reid, riling at the world around her – disability, race, religion, sex, drugs and a full-on (and very topical) rant against ISIS. The second half was more the classic Pam Ann, resplendent with hostess trolley and smuggled stash; she gets close and personal with those at the front, and thanks them with glasses of freshly poured bubbles. In a cleverly edited 2-part video spoof Downton Galley our heroine brought chaos to historical, rural England.

The FOH staff became an annoying distraction as they patrolled the aisles and rows with torches to ensure we all adhered to the no-photo policy. But ultimately Pam Ann held our attention, provided moments of hilarity, shocked the unshockable and left us squealing with delight as she departed on the next leg of her journey. Watch out Jersey – it’s going to be bumpy ride!