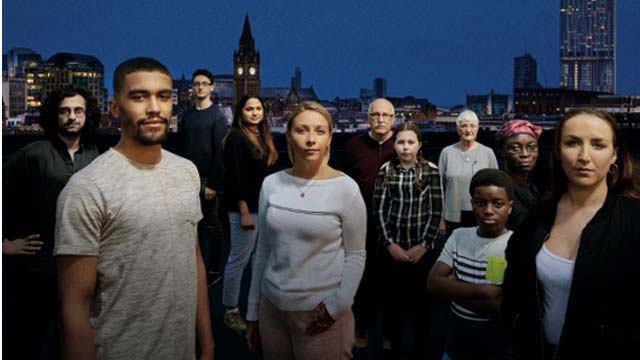 Our town at Royal Exchange

Thornton Wilder’s 1938 play Our Town tells the story of the fictional American small town of Grover's Corners between 1901 and 1913 through the everyday lives of its citizens. In Act I (Daily Life) the Stage Manager (Youssef Kerkour) introduces us to the characters. Act II (Love and Marriage) takes place three years later as the town gathers to celebrate the marriage of George and Emily. Act III (Death and Dying) is a further 9 years down the line and considers the inevitable end of life.

Acts I and II form the first half of the Royal Exchange’s latest production. The audience fill the auditorium and spill onto the stage. Those of us on the periphery observe cast and guests intertwined in general conversation akin to a community hall meeting. Tables and chairs aside, the staging is stark. The Stage Manager greets us - Kerkour offers a solid constant throughout the evening, mostly narrating and guiding us through the play-with-a-play, occasionally taking on small parts. He commands the stage, and the action within, with a gentle American twang helping us to understand the drama unfolding. Actors stand and sit as they are brought into the story, running around and through the public on stage; cast members are also hidden within the audience. As we move to Act II the onstage audience are directed to reposition their chairs in preparation for the wedding ceremony.

This is a communal production that immerses the audience in the action, strangers to the close knit community of Grover’s Corners. But if this is a town where very few people come and go, why do the residents acknowledge these strangers in their midst? Whilst performances cannot be faulted, this was an evening where little happens – the everyday lives of everyday people - and what does unfolds very slowly. However, the starkness of the long first half does help set the scene for the softer, ethereal nature of the final act, where life is questioned from death.

A bold but challenging start to the new season.

For more info and to book