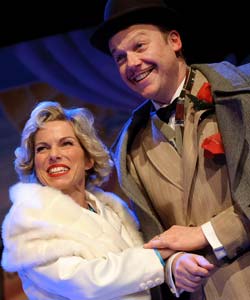 Our Gracie at Oldham Coliseum

The isle of Capri, the sun is beating down on the September afternoon as I wander down the little streets filled with every designer you could name, Gucci, Chanel, Dior. Rochdale is the furthest thing from my mind but fast forward six months and Gracie Fields, Rochdale’s favourite daughter who made Capri her home, is brought back to life in front of my very eyes by the wonderfully talented Sue Devaney with a company of six who are so versatile you'd think it was a cast of 100.

I'm afraid this is going to be one of those nauseating gushing reviews because try as I might I cannot find one single fault with Oldham Coliseum’s production of Our Gracie, it is a wonderful melding of new writing and old school glitz.

The cast are so multi-talented it takes your breath away, starting as a seemingly non-descript backing band, they take on character after character as we are taken through the chanteuse’s life at break neck speed. Liz Carney absolutely wows, having to play almost every other female character, completely coming into her own as Gracie’s friend Dolly. Recent Corrie guest star, Fine Time Fontayne, is easily the best in terms of comic timing and when he has the spotlight, is great, especially in his spotty socks.

Ben Stock brings a tear to everyone’s eyes as Gracie’s long-time collaborator, Harry Parr-Davis, always ready to accompany her on the piano. Jonathan Markwood is a wonderful character actor, taking on Gracie’s Dad and second husband with great aplomb. David Westbrook has us all in fits, particularly when he dons a bonnet and helps out Carney with the female characters. Lastly Matthew Ganley is wonderfully versatile, clearly an expert in accents, he is hilarious as a New Zealand surgeon and equally as revolting as a Fleet Street hack.

But perhaps unsurprisingly, it is the wonderful Sue Devaney who absolutely owns this production as the lady in the spotlight, Our Gracie. When I interviewed Sue for Canal St a few weeks ago, she told me about the preparations that have gone into this role and they are totally evident on the stage. She mentioned she had worked hard to perfect Gracie’s hybrid accent and it is so clever how she changes this accent, so subtly, as we move through Gracie’s life from Rochdale mill lass to Royal Variety Performance stalwart.

Although you might think this is an old production, it is debuting at the Coliseum before moving on to Stoke-on-Trent’s New Vic Theatre but it deserves a much longer run. Playwright Philip Goulding should be incredibly proud of his creation, the attention to detail is astounding and to fly through seventy years of life in ninety minutes and still give the audience the opportunity to know how the subject ticks is no mean feat.

I cannot recommend this performance enough if you want to step back in time and be entertained and with a rousing rendition of Field’s most famous song, Sally, at the end, everyone tottered off through the streets of Oldham humming away and feeling a bit happier.

For details of the show.