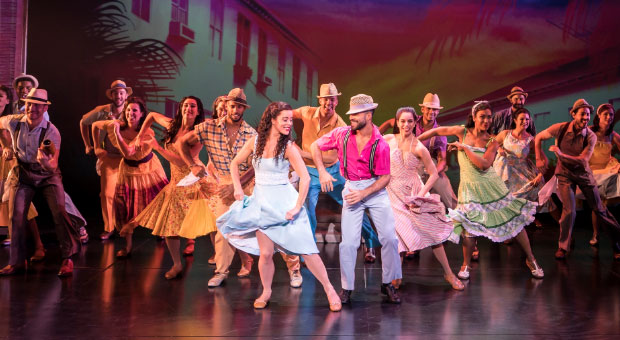 On Your Feet UK

Direct from Broadway, On Your Feet! is the inspiring true love story of Emilio Estefan Gómez and Gloria María Milagrosa Fajardo García. With her voice and his vision, this is their journey from Cuban beginnings, to the streets of Miami and international fame. Directed by Jerry Mitchell, with choreography by Sergio Trujillo.

On Your Feet! is a high-octane musical full of the Estefans’ classic hits: Rhythm Is Gonna Get You, Dr. Beat, 1-2-3 and, of course, Get On Your Feet; Conga closed Act One with the cast heading into the auditorium and getting people to their feet to conga in the aisles. The band, led by Danny Belton, bring to life the Miami Sound Machine Latino-pop magic.

However, this honest musical is not just about the glitz and glamour of international success. It reveals the struggles along the way: how to persuade white American pop moguls to believe in the Latin beat; Gloria Estefan’s love/hate relationship with her mother; her father’s bed-bound illness; and the famous coach crash of 1990 that almost took her life.

A new song - If I Never Got to Tell You - written for the show by Gloria and daughter Emily is a tender, heartfelt duet between Emilio and his mother-in-law around Gloria’s hospital bed as they rebuild the family relationship.

The strong cast includes George Ioannides as Emilio, Madalena Alberto as Gloria’s mother, superb comic timing from Karen Mann as Consuelo, and impressive footwork from Nathan Zammit; but it is Philippa Stefani who steals the show as she brings Gloria and her powerful voice to life, not least on Gloria’s return to the public stage at the American Music Awards, with the iconic Coming Out of the Dark.

From intimate scenes of family life to big, colourful concert showstoppers, this is more than your average jukebox musical. This is a show with an emotional heart, blistering choreography and high energy performances. The audience did not have to be asked twice to Get on Your Feet!