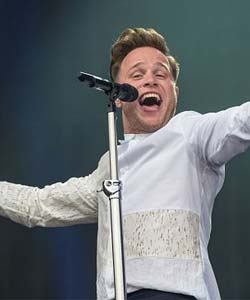 Olly Murs has been having hits now for 8 years. Since appearing on The X Factor, his popularity has never waned, and when you see him perform live, this success is cemented, as he is such an enigmatic and lively entertainer. And for his fans, he is the cheeky chappie from Essex; the people's popstar.

On his 24 Hours tour, Olly opens with the brilliant "You Don't Know Love" - he immediately has the huge arena on side, as this track has the hook to pull you in. His music is much more mature now, meaning his fans have grown with him.

In between tracks, he chats to us Mancs and mentions how great audiences are here. If you have ever been to a gig in London, you too will notice the difference, as here in the North West, gig goers know how to party.

Olly's band are slick and back him to the hilt. Their chemistry is evident and the effect is that of a celebration on stage, and it is infectious, bringing you to your feet within seconds.

Troublemaker and Dear Darlin' get the crowd going and this mixed set is part of his appeal. Ballads, dance tracks and pure pop perfection means that no-one goes home hungry.

The only flaw of the night? The gig is 90 minutes long, and I, like many could have danced for another few songs.

The crotch grabbing may be the headline grabber for some. But, Olly Murs is humble and has the image of a man who feels lucky to be performing to such huge numbers.

And given the huge success of his new album 24 Hours and this tour, he has never been better.