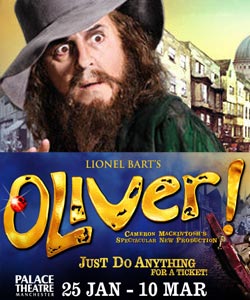 Oliver at The Palace Theatre

Last night,I took my Mother to see Oliver! as it has always been her favourite musical.

We were not dissapointed!

The show began well with Harry Polden playing Oliver.An,'inocennt, angelic voice' according to Mother.
The staging was also amazing with costumes that really took you back in time.
The Artful Dodger played by Max Greisbach was truly outstanding with a combination of facial expressions and an accent that kept us all constantly entertained.

The star of the show,in Mum's opinion, had to be Nancy played by Samantha Barks, and it comes as no surprise that she has been hand picked to star in Hollywood for Les Miserable by Cameron Mckintosh himself!!

The stand out song being 'As long as he needs me' which was dramatic and heartfelt.Echoes of the famous Film.

Neil Morrisey in the role as Fagin, was the only slight dissapointment on the night. Although he did have some memorable moments,Mum thought that overall he lacked the edge which Ron Moody portrayed so well in the Oascar winning film or maybe we are being a little harsh?

The problem,as ever,with an exceptional performance such as his, is that ANYONE pales by comparison..

That apart,the entire cast worked hard and were rewarded with an wonderful ovation.Justly deserved..

I have to say that I would highly recommend this production and would quite happily go and see it again.

The show runs until March 10th.