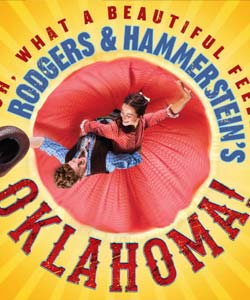 Oklahoma at The Lowry

Oklahoma is without out a doubt one of the biggest musical classics of all time on both screen and stage. With an amazing soundtrack, heart warming story and heaps of old school charm, the show is a real family favourite. From the moment the curtain went up in 1943 on Broadway to this very week at The Lowry, Oklahoma is still a firm favourite with theatre goers around the world.

Drew McOnie choreographs some breathtaking routines to the Rodgers and Hammerstein classics, ‘Oh, What a Beautiful Mornin’ ‘I Cain’t Say No!’ and of course the audience favourite ‘Oklahoma’ as the love story of Curly (Ashley Day) and Laurey (Charlotte Wakefield). The story, for those of you who don't know is based around rivalry between farmers and cowboys which effects the love story of the two lead characters.

This is a new production which is directed by Rachel Kavanaugh who has ensured that the show has an amazing charm with a stunning set and fantastic costumes. The story is told with real passion and emotion which takes the audience on a wonderful roller coaster ride which is a real credit to the production team. There are plenty of laughs too supplied by Gary Wilmot as Ali Hakim who has some really great scenes in the show and the audience love him. The cast is excellent and our firm favourite was Lucy May Barker who gives a perfect performance as Ado Annie.

Oklahoma is at The Lowry until March 21st and it is one not to be missed. The show is a real gem which is suitable for all of the family.