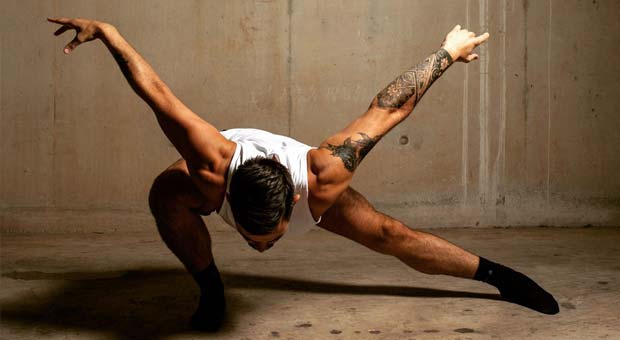 Nobody's watching for Turn on Fest

Nobody’s Watching – Adventures in Marginal Dance was on at Hope Mill theatre as part of Turn On Fest on 23rd January. It’s a set of five deeply personal and emotionally charged pieces, each one of which is self-choreographed by the person who performs it. It was commissioned by Superbia and is the brain child of project manager Greg Thorpe. The performers come from backgrounds as diverse as themselves, and the evening was in two parts, preceded by a short introduction given by Greg to provide context.

First we had the performances which in total lasted about 30 minutes. In order of appearance we saw Finley Letchford-Dobbs, Jessica Stevenson, Christian Asare, Aria Scere-Jacobs and James Henson. Mostly returning to dance after abandoning it for various reasons, the incredible thing is that some appeared by lucky chance. Each piece draws on its performer’s life experiences and was performed to a musical backdrop of their choosing.

Linford opened with a semi-militaristic / semi balletic piece that combined basic training with being knocked back whenever progress was being made.

Jessica gave a very fluid dance that used a body canopy to conceal and reveal.

Aria surprised us all by starting out from the audience and dancing onto to the stage to deliver a 3 part dance within a dance.

James closed the first half by breaking the rules slightly, turning the tables on us as well in the process. Using a mirror, in front of which he provided almost an exercise class, we were the ones being watched.

All of the performers conveyed their story well, whether this consisted of vulnerability or acceptance of life and its limitations. At the end all five dancers returned to the stage, and the applause that was given for the sheer guts needed in exposing themselves to scrutiny and engaging in emotional nudity was more than deserved.

After a short interval to allow the dancers to recharge their batteries we had a discussion session, with Greg as moderator. During this we learned that a formal training in dance can be a disadvantage as technique is drilled in and creativity is drilled out. We also found that encouragement between the artists had been crucial to the evening’s success. Questions from the audience were given frank answers, particularly from the trans performers. Accepting that one’s body can’t do what it used to be able to do, and go for personal perfection rather than strive for perfection per se was also a theme. It could usefully apply to all walks of life. Greg told us that this is a pilot which he intends to have the performers develop further with them as mentors. This is very good news indeed.

The standing ovation as the evening ended was the least that could have been given.

Sadly, this was another one night only event, but better news came as the evening was filmed and will be used by Superbia to promote similar events. Bravo.