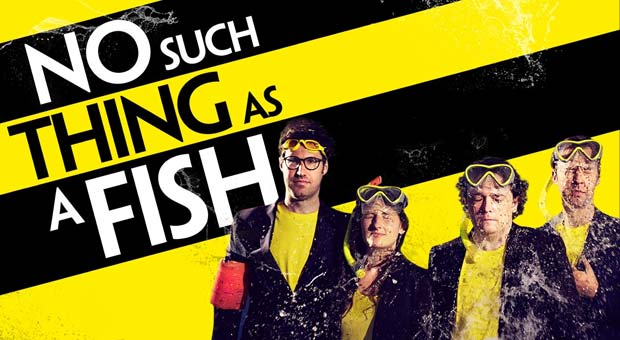 No Such Thing As a Fish

Did you know that every year that Britain exports over 50,000 boomerangs – to Australia?

How about that manatees control their buoyancy by farting?

Nope, me neither. Not until I started listening to ‘No Such Thing As a Fish’, the podcast offspring of QI hosted by Dan Schreiber, Anna Ptaszynski, Andrew Hunter Murray, and James Harkin – the consortium of uber nerds known as the QI Elves. On Sunday 17th March they brought their live show – In No Particular Order -  to the Lowry, and we headed down to see what bizarre facts they could come up with in a delightfully dorky evening.

The first half of the show was a call-back to an earlier podcast challenge; without giving too much away, it was a combination of comedy, factual pieces, and general poking fun of each other. It felt like watching your dorky friends try to out-weird each other, drinking beers, down the pub.

The second half of the show was a live podcast recording, set to be aired in the coming weeks. The show, which lasts about 40 minutes, is comprised of the four presenters favourite facts from that week, plus each of their individual research. If you’ve ever watched QI, then you’ll know the kind of bizarre things that they can come up with. As well as facts about singing the news, ne from the Manchester show, probably known by the locals quite well, was that when Manchester City’s Ethiad was opened in 2011, the naming caused some confusion as the word in Arabic also means united…

If you get the chance, try and catch the Elves in one of the rest of their live shows on the tour, but if you can’t make it, then check out their podcast to catch the Manchester recording, plus the other episodes which are all available online. It’s incredibly nerdy, delightfully dorky, and we promise you will find out that there is, in fact, no such thing as a fish.

Oh and by the way, we saved money at the bars with our @canalstvipcard too.