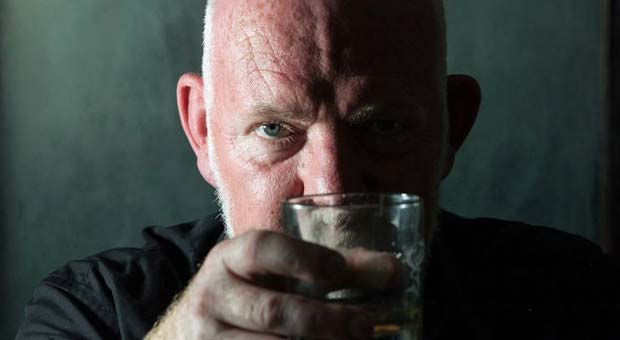 London Classic Theatre’s revival of Harold Pinter’s No Man’s Land began its national tour at the Oldham Coliseum on 5th September. Like a lot of Pinter’s plays, it’s a difficult one to understand, and there are large soliloquies in which it’s easy to become even further lost.

The play takes place in the house of Hirst (Moray Treadwell) a successful writer who has invited failed poet Spooner (Nicholas Gasson) back for drinks – which flow freely – having just picked him up in a local pub. Spooner is excessively talkative, with Hirst almost unable to get a word in. As the alcohol takes over, their exchanges and taunts become ever more the stuff of fantasy – or are they?

The next character to enter is “Jack” Foster (Joel Macey), Hirst’s housekeeper, in a splendidly vivid 70’s flared trouser suit, equally vivid hairstyle, and Cuban heels, followed by Briggs (Graham O’Mara), Hirst’s butler of sorts, in an equally modish safari jacket and sleeked back hair. After interrogating Spooner briefly, these two start bickering and we suspect that there might be more between them than being employed by Hirst.

To provide any more background would be to give the game away. Actually it would give the games away, as each character is part of one or more games that are being played out before us.

The characters are all very well portrayed. Hirst is obviously the successful man he appears to be and Treadwell’s voice and stature make him the perfect choice. Spooner’s dissembling is well done by Gasson, who keeps things going until the very end when he lets his guards down. Jack’s somewhat camp demeanour belies his determination of knowing when he’s onto a good thing, and Briggs’ outbursts of swearing were shocking even now – especially given that he was at pains earlier to conceal how he and Jack met.

At the close we were all left wondering how things would end up. The action takes place in 1975, when LG (let alone LGBTQIA+) was only just being tolerated – still less accepted. It’s not a gay play, more a dissection of interactions between non-equals, but that doesn’t preclude the former.

For its age, the play holds up very well. Mercifully, LCT didn’t try to bring it into the present, and the Trim Phone used on set took me back to the 70’s as if it was yesterday.

No Man’s land continues at the Oldham Coliseum for one more performance on 7th September, and then criss-crosses the country until November. For dates see here