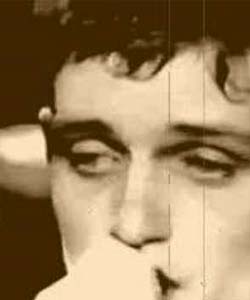 New Dawn Fades at The Dancehouse

It may be 36 years since Joy Division disintegrated following the suicide of frontman Ian Curtis, yet from the evidence of Manchester’s Dancehouse theatre on Thursday, the band has never been more popular.

A packed opening night watched Brian Gorman’s play New Dawn Fades, directed by James Foster, about the band which would re-group following the tragedy and go on to achieve even greater heights as New Order. The production debuted at the Manchester Fringe Festival in 2013 and has since then toured the UK.

It is very much a story about Manchester, rather than just the band; interviews with historical characters including Julius Agricola (Phil Dennison) and Frederich Engels (Sean Mason) reveal fascinating and little known facts about the city (did you know, for example, that Manchester got its name from the Latin for “breast-shaped hill”?).

The narrator is that pivotal figure in the Manchester music scene, Tony Wilson, giving the play at times more than a passing resemblance to Wilson’s own account of the city’s explosion of talent in the late-70s and 80s: 24-hour Party People.

Wilson is played here by Lee Joseph, who has certainly done his homework. He puts in a convincing portrayal of the once ubiquitous Mancunian, right down to his cocky, intellectual mannerisms and the glasses on the end of his nose.

But it is the story of Curtis, of course, which everyone was really there to see. Michael Whittaker provided an uncanny resemblance to the troubled icon, both in his haunting vocal tone and visually – even getting Curtis’s weird jerky dance down to a tee.

The singer’s struggle with epilepsy, overdose attempt and ultimate hanging was perhaps not quite so moving here as might have been expected given the subject matter. But New Dawn Fades does successfully represent the dichotomy which Curtis, along with so many other rock stars before and since, represents. On the one hand, we see an irresponsible and neglectful husband and father to Curtis’s wife Debbie (Natalie Perry) and baby daughter Natalie.

Yet Curtis certainly had an impossible amount on his plate at the unbelievably tender age of 23: as well as his marriage, fatherhood, rock career and debilitating neurological condition, he held down a civil service job and even found time for an affair with “Belgian bird” Annik (alluded to here but never seen on stage).

New Dawn Fades continues at The Dancehouse until Saturday 16 April before moving to Leeds and Sheffield. By Emily Rawlins for Canal St Online.