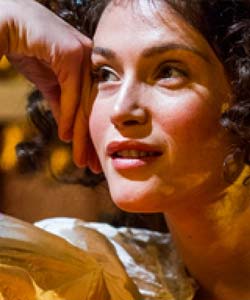 A bawdy comedy set in 1660, may not sound like everyone’s cup of tea. But, since Gemma Arterton stepped into the role of orange seller – Nell Gwynn in the West End, audiences have flocked to see this zany, funny and equally moving piece. And you can clearly see why.

Here, Laura Pitt-Pulford plays the working-class lass who catches the eye of Charles II, and what follows is a crazy comedy, and director Christopher Luscombe cleverly  combines song and dance, double entendres, innuendo and much to admire and enjoy, and it all adds up to a funny and fast paced night out.

Pitt-Pulford, fresh from her success in Flowers For Mrs Harris at the Sheffield Crucible makes a head- strong Nell Gwynn, who has higher ambitions for herself, than many of the men that she meets. This gifted actress imbues Nell’s optimism with her longing to be loved, and her wicked sense of humour and you cannot help but fall for the character. She is presented here, as incredibly knowing and it is a welcome change, as she is no push over.

Ben Righton is also a joy as Charles II, as beneath the pomp and ceremony is a man who wants to embrace change. He has some of the best lines, and the audience roar when he states ‘Why on earth’ we would ever think of leaving Europe? The great thing about Jessica Swale's writing here, is how she makes the play so accessible, but also because history always has a way of repeating itself, so many of the situations that Nell finds herself in, still ring true today.

The two leads are ably supported by an excellent supporting cast, and Esh Alladi steal many scenes, with his rolling eyes, and killer lines. The entire cast engage the audience during every single scene, as their comic timing is superb.

Hugh Durrant’s set design is grand and inviting, as we can clearly see the contrast from Nell’s life in the grime, with that of the gorgeous palace. Live music supplied by a talented bunch on a balcony, witty ditties, with naughty mentions of titties, and great performances make Nell Gwynn a real treat and perfect escapism.

Nell Gwynn is at the Lowry until 4 March