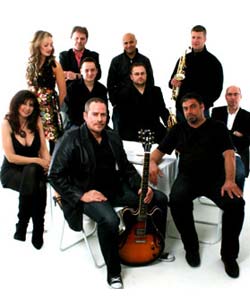 Nearly Dan - Band on the Wall

Band on Wall is a great venue to see bands playing live. It affords the audience a close and almost personal experience with the music and musicians. On this hot June night a packed house has come to see Nearly Dan, a Steely Dan tribute band.

The band is made up of about 10 members, including a brass section, essential for recreating that polished and 'steely' sound.

At the bar a sweepstake, between a small group of fans, was held to guess the opening number whoever choose 'Boston Rag' won.

I am a Steely Dan fan and from the first note you can tell that this band has practiced to faithfully re-produce the sound and style of Becker & Fagen's music, a duo famous for being very picky about how they record.

The sound was clear and Steve Hayes vocals do justice to Donald Fagen's delivery style and tones. As the music progressed it became more and more like listening to the records that the audience knew so well.

Rob Ralph plays lead guitar and his playing sounds like Walter Becker's. All the musicians delivery is a joy and worth an extra mention is the backing vocal duo taking the lead in songs such as 'Dirty Work' from the first album Can't Buy a Thrill.

The band played two sets which included many of the major hits and other excellent tracks recorded by Steely Dan. The problem must always be the same with such a huge back catalogue what do they play?

However, the audience was not disappointed with the set-list including renditions of Peg, Kid Charlemagne, Doctor Wu, Rikki don’t lose that number, Haitian Divorce and Black Cow.

This was a great night with music that anyone who loves real music should not miss. So all in all Go back Jack and Do It Again and Again...

Nearly Dan have been touring this music for 10 years and can be found at many major music events playing with other excellent tribute bands. Check their website for tour dates.