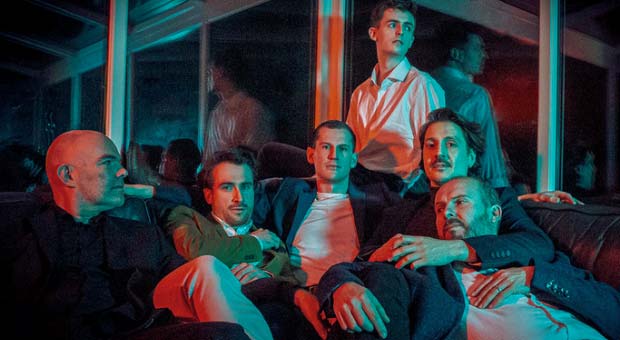 My Night with Reg

My Night with RegSet in the shadow of the 1980s’ AIDs crisis, My Night with Reg is the award-winning play by Kevin Elyot. Presented by Manchester’s Green Carnation Company the action takes place in a neon-lit London flat, and explores the relationships of a group of gay men and their connections to the mysterious Reg.

Whenever I see French windows on a set I am reminded of the classic saucy farces of the 80s; seeing a dungaree-clad young decorator bent over to paint the lower window frames with his backside suggestively (if unknowingly) thrust upwards suggests similar. However, rather than the frantic running around and high-energy confusion, My Night with Reg is more a verbal farce unravelling a labyrinth of secrets and personal connections centred around Reg. Across the years aspiring chef Guy (Simon Hallman) hosts a series of get-togethers with friends John (Nicholas Anscombe), Daniel (David Gregan-Jones), Bernie (Marc Geoffrey), Benny (Steve Connolly) and part-time barman/decorator Eric (Alan Lewis).

Slickly co-directed by Green Carnation founders Dan Ellis and Dan Jarvis, the script offers plenty of laughs and celebration but reveals lost love and heartbreak as the friends come to terms with the impact that AIDS has on their lives. For gay men the 1980s was a period of uncertainty as TV ads and news alienated a society, friends and lovers passed on and every ailment led to the worry of am I next? Reg was the catalyst that brought these friends together; a friendship affected, and strengthened, by mortality, but one where moments missed led to regret – tomorrow may be too late to say I love you. HIV is no longer the terrifying threat of 30 years ago; amazing medical progress has been made, but there is still work to do to ensure the stigma of HIV becomes a thing of the past.

My Night with Reg runs for only four performances and ends Saturday 25th - do not miss the opportunity to see this classic piece of gay period drama and give a donation to George House Trust, the charity that Green Carnation Company proudly support.