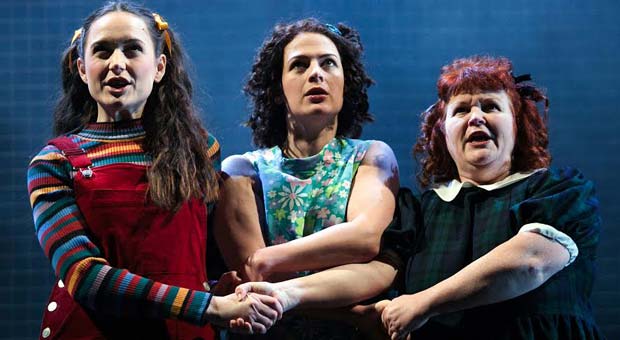 My Mother said I never should

My Mother Said I Never Should has a complicated timeline, made even more complicated by the staging. All acts/scenes take place on the same set that is sometimes an area where children play outside, a house, a garden, an office, a hospital, or a back yard. We jump forwards and backwards in time, with the characters appearing as children or adults as particular scenes dictate, which have various locations in Manchester and London – and ending up in Oldham. Some extremely rapid costume changes are needed to cope with the broken tempo.

The multi-purpose set, against all odds, works – even if at times it’s hard to envisage things. Comprehension is aided by imaginative lighting that emphasizes just the areas required.

The play lays bare the lives of 4 women, all directly descended from each other, starting with Doris (Judith Paris), her daughter Margaret (Lisa Burrows), her daughter Jackie (Kathryn Ritchie) and finally her daughter Rosie (Rebecca Birch). Men only feature as off-stage characters and in sound effects (like mowing the lawn, or honking the car horn). Thus we have Jack, Doris’s husband, and Ken, Margaret’s. Although absent from view they are essential to the action.

Doris is an only (and illegitimate) child, and this reflects in Margaret’s strict upbringing. Margaret isn’t quite as strict with Jackie, who has artistic abilities and who becomes pregnant by a fellow student. We see how each mother’s attitudes and outlook on life start out being inherited from their mother, but then quickly changed to suit their own circumstances. As time moves on we also observe how skipping a generation (or two) works. Grandparents always spoil their grandchildren, to the parents’ dismay. Here it’s taken a stage further, and the relationship between Doris and Rosie towards the end of the play is very touching.

Acting is solid. You can see that each mother wants the best for their sole daughter, if at times the methods employed are a bit harsh, and the growing pains of youth are well portrayed too. There are some good one-liners, but there are also scenes that make you sit up – the moment when Rosie learns the truth that’s been withheld from her for years is heart-rending.

My Mother Said I Never Should was first performed in 1987 (in Manchester) and it has as much punch now as it had then.

More details and to book here