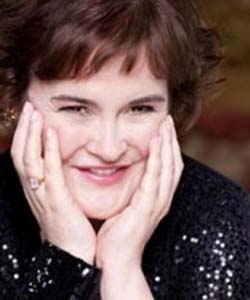 Susan Boyle has been described as a phenomenon. Now that I have seen her sing live, I am totally in agreement. Tuesday, 25th March 2014, a little Scottish woman took to the stage and stole the hearts of a packed, Bridgewater Hall. I have seen a lot of concerts in my time but don’t believe that I have ever seen such adulation for a performer as I witnessed on Tuesday.

Susan was supported by a small orchestra and two lady backing singers. I had read that Susan’s repertoire would consist of standards, covers and original songs from her five albums. She was quoted as saying that there would be a few surprises. I don’t plan to name all the songs but the biggest surprise for me had to be ‘River Deep, Mountain High’, which, of course is associated with Tina Turner and not a “wee wifie” from Blackburn, West Lothian.

Her rendition of a Rabbie Burns’, ‘Ae Fond Kiss’, a poem set to music, was hauntingly beautiful.

The audience was mostly in the older bracket but I saw a few youngsters there too. Judging by the standing ovations, yes that should be plural, as there were a few, the audience, I sensed, left The Bridgewater Hall fully satisfied.

Susan Boyle has a voice which, for me, sounds even better live than recorded. Powerful, then sweet, Susan’s voice can reach into your chest and rip out your heart.

Beautifully supported on a couple of songs by The Manchester Show Choir.

Susan Boyle is a phenomenon, for me, that is, official.The finale number 'I dreamed a Dream'reminded us all of how it all started.

The other star of the night was of course,The Bridgewater Hall Manchester.

If you get the chance to see her, then please go. I guarantee that you won’t be disappointed.