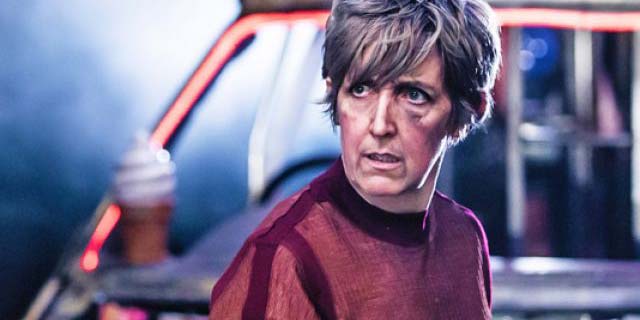 Bertolt Brecht’s 1939 play Mother Courage and her Children was set in the 17th century during the Thirty Years’ War. In this co-production between the Royal Exchange Theatre and Headlong, Anna Jordan’s adaptation moves the action forward 400 years to a future state Europe of the 2080s. The continent is at continual war, countries having become grid references, and the fight for victory is between the armies of blues and reds. Mother Courage and her three offspring from different fathers roam from camp to camp offering a range of merchandise that changes to meet demand: what starts as sweets, boots and beer develops into drugs and guns.

Julie Hesmondhalgh is a tour de force as Mother Courage – or MC as she is referred to in this adaptation – commanding the stage as she travels across the grids of Europe selling her wares out of an old ice cream van. The van adapts to war throughout the journey, becoming a skeleton of its former self, yet remains the ultimate burden as MC hauls it off towards the next grid reference in the closing moments.

The ensemble cast play out the plethora of characters MC meets on her journey through the years. In true Brechtian style the drama is interspersed with song – impressive original compositions by Jim Fortune (with a nod to Kurt Weil), played live by Nick Pynn on his perch overlooking the action. Whilst often harsh, there are times when the music offers an emotional tenderness that provides an eerie relief from the ravages of war.

A declaration of peace proves devastating to Courage – she needs war to run a successful business; she thrives on the hardship of others. Acts of heroism in conflict are now punishable by death in peace. Can a world really survive without conflict? Is peace the easy option? In our current climate, who knows what our future may bring. The circle of illuminated stars cut into the flooring around the action suggests a nod to a former unified Europe. Is the world of MC a foretaste of Europe beyond 2019?