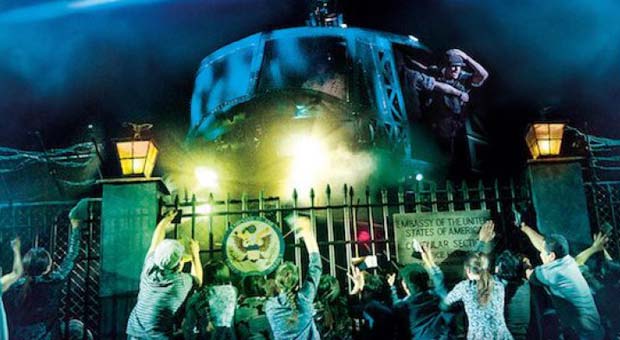 Miss Saigon at the Palace Theatre

Canal Street media was very excited to be invited to see Miss Saigon for its press night at the Palace Theatre and boy we were we impressed..

Miss Saigon is approaching it’s 30th birthday and this juggernaut of a musical is as relevant today as it was back then. When the play first opened in 1989 the Vietnam War was unfortunately still fresh in the minds of people at the time, many thousands were impacted physically and mentally by what they had witnessed on both sides so it is hugely important that if you are doing a play about such a dark part of history that the play has the right tone and Miss Saigon ticks all the right boxes.

The uncomfortable truth of Miss Saigon is that many children were birthed during this war usually out of liaisons between American servicemen and prostitutes, the men victims of a horrible images wanting to escape the violence they were inflicting and the women who needed the work to simply survive. Cameron Mackintosh’s take of Miss Saigon beautifully captures what needs to be accepted as truth from that terrible conflict.

The cast are magnificent with standout performances from Sooha Kim as Kim and Ashley Gilmour as GI Chris in the lead roles, they give a fantastic performance as the ill-fated lovers. We also witnessed a beautiful performance from Red Concepcion who played ‘The Engineer’ who is essentially a pimp trying all he can to escape Vietnam and get to America. This character is undoubtedly horrible who will sink to very deep lows to fulfil his ambitions, the actor is totally believable in the role and it does make you question how would react if you found your country destroyed by such an insidious war.

Away from the acting the sets themselves are stunning and clearly no expense has been spared on creating this magnificent stage play. It is no surprise that this musical has such a huge technical team, to put on such a beautiful performance it needs it.

I cannot recommend highly enough that if you are in Manchester and a fan of the theatre you get yourself to see Miss Saigon, this is an absolute tour-de-force and words cannot fairly describe how good this play is, please see if for yourself.

Miss Saigon is at the Palace until May 12th. More here