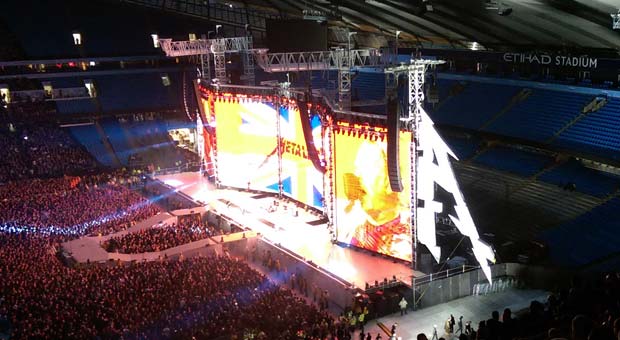 The Etihad Stadium is about 20 minutes walk from the Northern Quarter and last night Metallica performed there as part of the ‘Worldwired’ tour. This 3 year long tour is now nearing its end with the only other UK show in London show to come.

Metallica where formed at time when I was just a teenager and I was certainly a fan of ‘metal’ music. But for me groups such as Metallica and Iron Maiden never really stood out, a view which at the time was unpopular, but I still stand by today.

However, nearly 40 years later, some eleven albums under their belt, numerous worldwide hit singles and a long list of awards it seems that Metallica are extremely capable of delivering what their fans want.

And so they seemed to do it again last night, in a rather damp Etihad. The stadium was pretty much full with the main stage action taking place in front of the standing stalls and ‘Golden Circle’ [with tickets priced at a wapping £270].

Metallica strolled on stage around 8pm and kicked off with ‘Hardwired’, the current albums title track.

For those of you who are familiar and possibly quiet a fan of the group I suspect the concert was pretty good. The set-list included many of the bands hits and the encore was reserved for those tracks that even the casual fan such as myself would know and enjoy.

Except for one of my personal hates (I expect to get berated for this) the ‘rock powerbald’ which in this case is the nonsense called ‘Nothing else matters’. All these rock groups have felt the need to record them, for some reason... In my view they should all be consigned to the dustbin.

However, other tracks such as ‘Enter Sandman’, ‘Seek and Destroy’ and ‘For who the Bell Tolls’ all came across well, even if the lyrics were barely distinguishable.

Oddly by far the biggest cheer was when they played a short cover of the Stone Roses’ – I Wanna Be Adored, which might reflect the vast number of less dedicated fans who paid a mere £60 for their tickets.

I have seen many rock bands play live and one of the best reasons to go to see these groups is the stage show and these tend to be done well by many long standing rock groups.

But Metallica appear to have left the fun stuff at home. Honestly a few large flame throwers and some fireworks really does not cut it. The massive video wall behind the band was certainly good, letting you see what these ‘dots’ where actually doing on stage (mostly James Hetfield changing his guitar for yet another flying V, but I digress).

I am pretty confident for those mega fans in the stalls and circle this would have been a very good concert, but for me with merely a passing interest in this band I can only give them a 3 star rating.

Let’s face it bands get weary after a year of touring the same old stuff, so maybe the flamboyance and other things that could have added to this performance have been left at home... They might ‘Wanna be Adored,’ but I am not sure for what?

Tickets for the 20th June in London and other shows can be bought here...