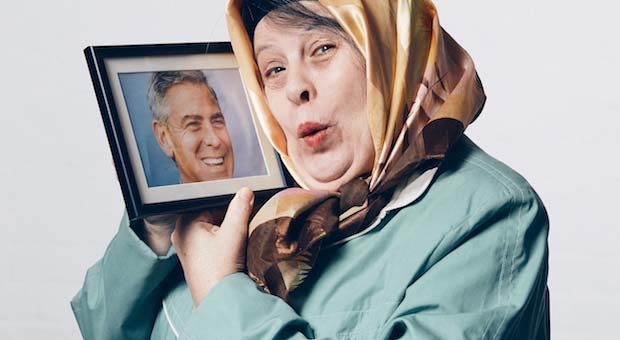 Me, you & George Clooney

Me, You & George Clooney is a Manchester Fringe event at the Kings Arms in Salford. Unfortunately there were only 11 of us in the audience yesterday but that made it a bit more intimate. Nellie is an old lady who hasn’t been out since she was mugged. Her care worker Nigel has domestic issues of his own. Other people also appear over the internet and we see them via a projector that shows what’s on screen. It’s a heartfelt piece that starts a bit slowly but gathers pace over the 90 minute performance

Nellie is addicted to home shopping, daytime TV and her Nespresso machine – hence the George Clooney link. Another idol is celebrity chef Gino d’Acampo, for whom she’s knitted a willie warmer. She also has a phobia about lifts, dating back to an unfortunate event way back in time.

Nigel is an overworked care worker who’s separated from his wife and the two children that he can’t make contact with. He’s struggling to make ends meet and is on HR’s radar.

Nigel has inherited Nellie after her previous care worker was moved on. She’s not too keen on the change at first but after a brew and a biscuit they form an initially tenuous bond that grows. Things start out in a structured way with Nigel asking his questions and receiving the same answers every time, but he makes progress and manages to get her to venture out. Result.

Fast forward and Nigel’s problems are growing. He’s having difficulty contacting his children as his wife doesn’t take his calls. Nellie comes to the rescue by locating them with Facebook, with mixed results for all concerned.

There is some clever interaction with TV’s This Morning show and Nellie is over the moon when her heartthrob chef appears wearing her knitted garment – the real event is here https://www.mirror.co.uk/3am/celebrity-news/gino-dacampos-wild-younger-years-13085144 - and when Nigel gets her on a phone in to cure her phobia you can see she’s on the mend.

The time comes when HR get their way and Nigel is let go, leaving Nellie alone again. It’s at this point that the tables are turned. Nellie adopts the role of care worker and she’s the one asking the questions and receiving stock answers. It’s a neat twist and there is a happy ending.