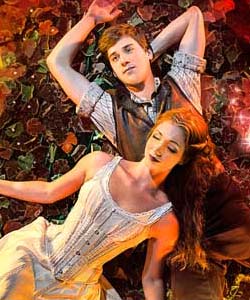 Matthew Bourne's haunting production has smashed box office records across the UK and the USA since its 2012 premiere. A gothic romance for all ages, Sleeping Beauty is the latest classic in New Adventures' growing repertoire.

Perrault’s timeless fairy tale, about a young girl cursed to sleep for one hundred years, was turned into a legendary ballet by Tchaikovsky and choreographer, Marius Petipa, in 1890. Bourne takes this date as his starting point, setting the Christening of Aurora, the story’s heroine, in the year of the ballet’s first performance; the height of the Fin-de-Siecle period when fairies, vampires and decadent opulence fed the gothic imagination. As Aurora grows into a young woman, we move forwards in time to the more rigid, uptight Edwardian era; a mythical golden age of long summer afternoons, croquet on the lawn and new dance crazes. Years later, awakening from her century long slumber, Aurora finds herself in the modern day.

This is a mesmerizing and exquisite production. The staging is beautiful: puppetry, lavish costumes and stunning scenery taking us from 1890 to modern day. The performances were faultless: Ashley Shaw and Chris Trenfield as the young lovers; Adam Maskell as both the sinister, towering Carabosse and her son Caradoc; and special mention to Chorlton-based Leon Moran as Autumnus. With dry ice, confetti cannons, atmospheric lighting and sound, this is a 5 star package of delight.