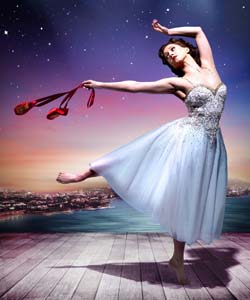 Matthew Bourne has a great formula for reinventing classic stories, through the art form of ballet. He is unafraid to modernise, tweak and add tablespoons of humour to each and every tale that he revisits.

I have enjoyed his takes on Carmen (The Car Man), Edward Scissorhands, Swan Lake (with a male cast), and Play Without Words which was a reimagining of the film, The Servant. As a choreographer and director, he rarely lets the audience down. Attending one of his shows is exciting, as you are keen to see what he is going to do with a recognised text.

Hollywood is filled with studios remaking films with very little imagination, but here, on stage there is so much that it dazzles the senses.  The Red Shoes is another winner for Bourne, as it is bright and vibrant, yet also incredibly dark. In two hours, there is so much packed into the narrative, that you hardly have time to take a breath.

The plot revolves around a young dancer, played beautifully by Ashley Shaw who is torn between the ballet and the man she loves. She spots a pair of red shoes in a shop window and her life then takes a drastic turn.

Based on the Michael Powell and Emeric Pressburger film, which in turn was adapted around Hans Christian Anderson’s story, it is a fascinating tale with the colour red at it’s core, along with the themes of temptation, greed, success and failure. You may even recall that the story has inspired a Kate Bush album. You can see why, as it has all of the elements of a good fairy tale, but with added vim and vigour.

Lez Brotherston’s striking set takes us back stage, into the auditorium and beyond, and this means we see every facet of this young dancer’s life. We see what drives her and how she is willing to die for her art. This may seem dated, but every week on talent shows, we hear this: “I don’t want to go home, I’m having so much fun, so please vote for me!” Hardly life or death, I know but it’s billed as such. So, the similarities between art and popular culture are there for the taking.

The live music helps carry you along also, as previously Matthew’s other productions have tended to favour pre-recorded music, yet this time around seeing a conductor and hearing every beat live lends The Red Shoes an epic quality that sweeps you along.

If you don’t know the film or the central storyline, it is worth reading the programme briefly before you sit down, as some of the plot strands are slightly rushed to slot into a two-hour time frame.

But this is a minor quibble, as Matthew Bourne’s production of The Red Shoes is a technicolored dream of a show; as it is rich, colourful, innovative, impeccably performed by the entire cast, with inspired dance sequences, a movie like set, and like much of his previous work – this is the stuff that dreams are made of.

Matthew Bourne’s The Red Shoes is at The Lowry until 3 December Book here.