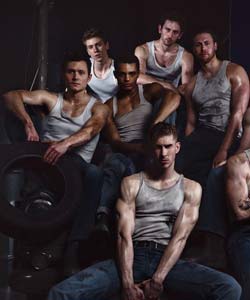 Matthew Bourne's Carman at The Lowry

Me and my partner Matthew had never been to see a Matthew Bourne production before, we’d heard of them for sure. Sat in The Lowry waiting for Matthew Bourne’s ‘The Car Man : Bizet’s Carmen Re-Imagined’ to begin, we didn’t really know what to expect. What we were about to experience was something we’ll remember for a while. For all the right reasons.

Loosely based on James M. Cain’s classic novel ‘The Postman Always Rings Twice’, the production really was electrifying from beginning to end. Don’t expect singing and lots of dialogue on stage, as you won’t get these. It’s no Priscilla. It’s a dance production, a ballet, with a company of hugely talented dancers and performers and an epic set.

The music playing throughout is the famous score from the Opera ‘Carmen’ with some new, equally fantastic, music commissioned too. It’s rousing and very dramatic. You’ll recognise most of it.

As the performance started, within the first few minutes the stage was filled with naked male dancers as they took to the showers for a ‘steamy’ but very fun scene. The frank depictions of violence, sex and homoeroticism are prominent throughout, but never uncomfortable to watch.  The car really rocked in one scene but there’s more to the production than this.

We got it all - lust, passion, murder and revenge, all with a coating of sexiness. The energy and fast pace of the production meant before we knew it, the two-hour production (with interval) was over and we were sat wanting more. Going to watch the production as dance / ballet virgins, our cherry has been popped and we look forward to the next Matthew Bourne production coming to a venue near us.