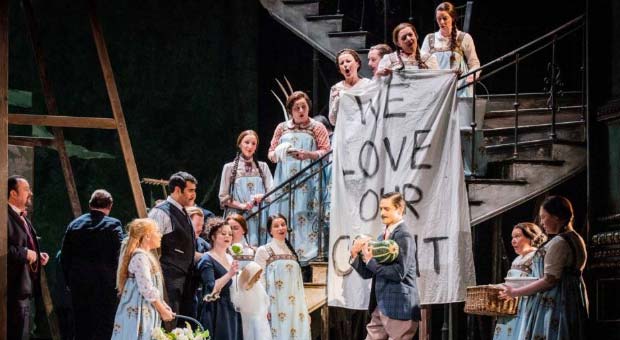 Opera north are back for the latest season at The Lowry. This season goes from the chilling to the comedic, from London to New York. Starting with The Marriage of Figaro, (see review below), the Opera company have contrasted this opera with Benjamin Britten’s chilling ghost story, The Turn of the Screw, and Kurt Weill’s ‘Broadway Opera’, Street Scene. Such contrast always makes Opera North such a delight to experience.

I guess due to its popularity, it is no surprise that opening night of the season is Mozart’s, The Marriage of Figaro. Imagine (for those who can remember), ‘upstairs downstairs’. Figaro and Susanna are getting married, but trouble clouds the horizon. Figaro’s master, Count Almaviva, is out to bed his bride-to-be Susanna. Meanwhile the heartbroken Countess finds herself the object of Cherubino’s adolescent passion. To top it all off, if Figaro cannot repay a debt to the housekeeper Marcellina, he’ll have to marry her instead! You can always count on general mayhem in one of Mozart’s greatest operas, with mistaken identity and misunderstanding, heartache and forgiveness being at the centre of this hilarious story.

This revival of Jo Davies' five-year-old Opera North production works incredibly well. Her version is set in English and the chemistry between the cast is such a delight to watch. This production is very slick, plenty of laughs and superb singing, with Leslie Travers’s mobile set showing both the downstairs and the upstairs of this society.

With society moving to more of an equal and enabled world, this tale of social and sexual politics in eighteenth century could fill outdated. However, the men are as much ridiculed as the women and this production feels more a statement about human relationships, not political statements. It is bursting at the seams with invention and wit and is highly attractive for well-seasoned opera fans, as well as younger newcomers who Opera North are helping to access through its Under 30s ticket scheme.

Phillip Rhodes gives a smooth Figaro, whilst Fflur Wyn’s characterisation of Susanna is a delight and so is Heather Lowe in the role of the precocious Cherubino. Maire Flavin’s Countess blends dignity and humanity with a dash of humour against Quirijn de Lang’s strong portrayal of the philandering Count. To add to all of this, Joseph Shovelton as Don Basilio, the fussy music-master, Jeremy Peaker as Antonio the bolshy gardener (with a South Yorkshire accent obviously) and Gaynor Keeble add to the delight of this production.

James Hendry conducted the orchestra bringing Mozart’s lyrical and quite infamous music to life perfectly. The sublime music bubbles along with comic high spirits, conveying all the delight and pain of love, and the agony and ecstasy of desire. It all makes for a suitably joyous production, one likely to please opera novices and aficionados alike.

Opera North are currently performing their season at The Lowry with The Marriage of Fiagro on Thursday 12th March and Saturday 14th March. Benjamin Britten’s, Turn Of The Screw, can be seen on Wednesday 11th March and Kurt Weill’s, Street Scene, can be seen on Friday 13th March.