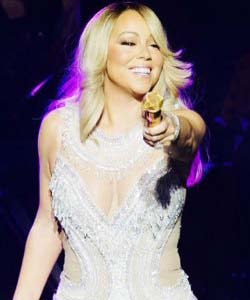 It’s been over a decade since Mariah Carey graced Manchester with her presence and the Arena audience were more than ready for the diva when she made a prompt start at just before nine thirty. Lazing on a chaise longue held aloft by her four male dancers, she was brought out onto the stage before launching into her classic hit, Fantasy, the name sake of this tour, Sweet Sweet Fantasy.

Having never seen Mariah before, it was pretty magical to hear those vocals that we know so well reverberating around the Arena as the crowd, in fine voice, became her unofficial backing band. Hit made way for hit as Carey treated us to her back catalogue of crowd pleasers including Emotions and the first ballad of the evening, My All before she disappeared to change out of the shimmering body suit to another glittering “ensemble”, I quote the woman herself for Always Be My Baby.

Highlights for me were Trey Lorenz accompanying her on the smash she had with Boyz II Men, One Sweet Day and a video of Whitney Houston as she recreated their duet, When You Believe. Carey knows how to work a crowd and hardly any hits were missed with a great dance section of I Know What You Want, It’s Like That and Loverboy but sadly the uber classic Dreamlover was being rested but we won’t split hairs.

The only criticism I would have was a lack of interaction, when Carey did speak to her adoring crowd, it seemed a little distant and forced.

In terms of staging, it was simple, some video screens and a curtain was all Mariah has chosen to take on the road with her but with a voice like hers, she doesn’t need gimmicks. She is absolutely at her best with just a microphone and a spotlight, the best song of the night for me was Hero closely followed by the finale, Without You.

Carey proved that her voice is her business and she can still hold the crowd of an arena in the palm of her hand.